The tide may be starting to turn on Wall Street. After a tumultuous year of battling soaring inflation and rising interest rates, evidence is mounting that the worst of those economic conditions might be behind us.

Investors digested a better-than-expected Consumer Price Index (inflation) number last week, which was followed up by a much softer Producer Price Index (wholesale inflation) result. Inflation has now declined for four consecutive months since hitting a 40-year high of 9.1% in June.

That’s great news for many companies, but especially Sea Limited (SE), which operates a portfolio of consumer-focused businesses. The company just reported its financial results for the third quarter (ended Sept. 30), and its stock rocketed by 36% on the day. The stock remains down 82% from its all-time high, so here’s why investors might want to take advantage of that opportunity right now. 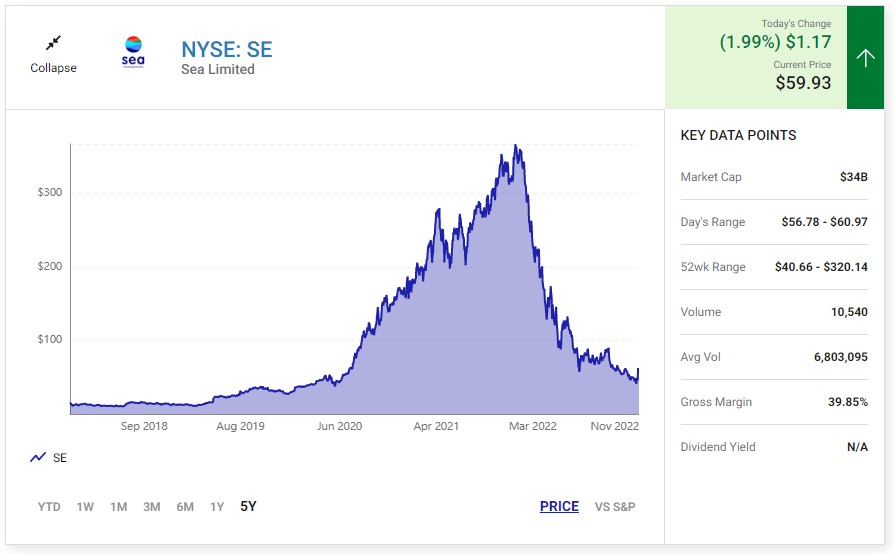 Sea Limited is consumer focused, but diverse
When inflation and interest rates are rising in tandem, consumers are hit with a double whammy of cost pressures that eat away at their spending power. As a result, companies reliant on consumer spending have seen a slowdown in sales throughout this year. Sea Limited is certainly one of them, and the difficult environment has prompted the company to shift its focus from growth to profits, and its bottom-line results are steadily improving, which should lead to a healthier business in the long run.

Sea Limited operates in three core areas. E-commerce is its largest segment by revenue, driven by the Shopee platform. The digital entertainment segment is led by the company’s game development studio, Garena. Finally, its digital payments business is its smallest by revenue, but also its fastest growing.

Its gaming segment, which is responsible for the global smash-hit mobile title Free Fire, was booming during the pandemic and drove much of Sea Limited’s growth. In fact, during 2020 it grew to become almost as large as the company’s e-commerce business — but for context, in the most recent third quarter of 2022, the e-commerce business generated double the amount of revenue that gaming did. It’s because pandemic restrictions have fallen away and consumers have mostly returned to their normal lives, which means they’re spending less time playing games.

Quarterly active users declined by 22% during Q3 on a year-over-year basis, and bookings (which usually convert to revenue later) shrank by a whopping 45%. Such a contraction would be enough to hurt any company, but Sea Limited’s diversity is its saving grace.

Its e-commerce business came in with $1.9 billion in Q3 revenue, a 32% jump year over year, with customers spending a record $19.1 billion on Shopee — which is a hybrid business-to-consumer and consumer-to-consumer platform. So, despite its shrinking gaming segment, Sea Limited was carried to companywide growth of 17% by e-commerce.

Sea Limited’s greatest challenge
When a company spends years successfully investing in face-ripping, triple-digit percentage growth at the expense of profitability like Sea Limited did, it can be incredibly challenging to pivot. To be clear, it was absolutely the right strategy at the time — capital was cheap and easily accessible, which meant building its customer base and revenue pipeline were the top priorities, with profits on the back burner.

But now the reverse is true. Investors want to see healthy businesses that can survive without requiring further cash injections, because interest rates are high, which makes money more expensive. Sea Limited answered the call, and in the third quarter, it made its smallest net loss in over a year. But there’s still work to do before the bottom line flips into the black. 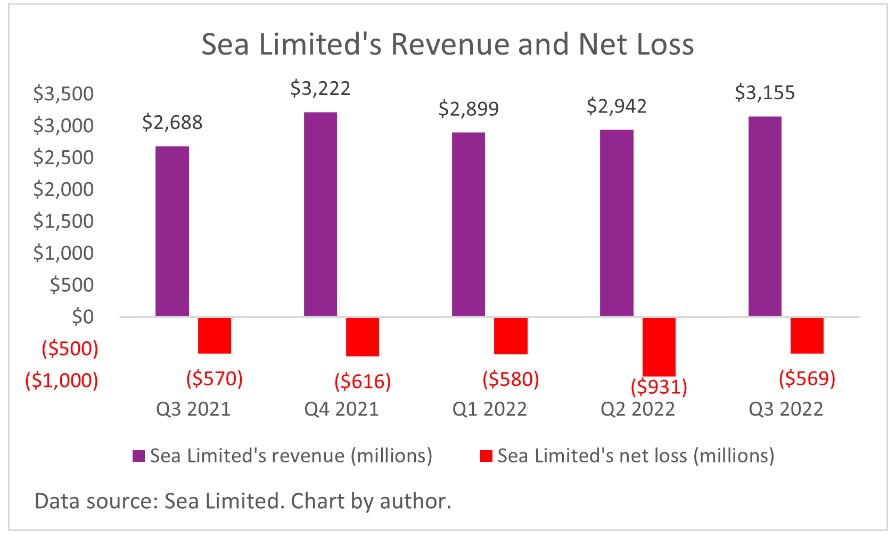 Sea Limited’s $569 million quarterly loss might seem large at face value, but the company has over $7.2 billion in cash, equivalents, and short-term investments on its balance sheet. This provides a few years of runway to reach profitability (assuming current losses remain constant).

The tricky part is finding the right mix between trimming losses and maintaining growth. Sea Limited, for example, cut almost $200 million in marketing costs in Q3 compared to the same time last year, and if that continues then revenue growth is almost sure to slow down further.

Why Sea Limited stock is a buy now
The good news for Sea Limited is that this environment is unlikely to last forever. Inflation has already begun its descent, and absent any left-of-field economic event, next year should be somewhat more favorable for the company.

Sea Limited stock is down by 82% from its all-time high, and it now trades at a price-to-sales ratio of just 2.8, which is its lowest multiple since the company listed publicly. Yet despite the pessimism reflected in its stock price, Wall Street is still relatively bullish on Sea Limited. Of the 32 analysts tracked by The Wall Street Journal, 21 gave the stock the highest-possible buy rating, with just one single analyst recommending selling.

The company operates in some of the most important digital industries of the future, so the case for owning Sea Limited stock for the long term is clear, especially at its current price.