In today’s struggling market, it isn’t too difficult to find stocks that have had a difficult past 10 months, and that makes it an excellent time to shop for great stocks that are on sale. Of course, just because a company’s shares are down does not necessarily mean they are worth buying. But some corporations seem to be trading at more than reasonable levels given their prospects. Let’s look at two examples investors should consider: Novavax (NVAX 5.94%) and Netflix (NFLX 3.98%).

Can a company that isn’t yet profitable be considered “cheap?” In my view, the answer is yes, and Novavax is a good example. Although there is still red on the bottom line, the biotech is generating revenue from its coronavirus vaccine, Nuvaxovid. What’s more, Novavax’s revenue guidance of $2 billion for this year currently exceeds its market cap of $1.8 billion.

The bears will reply that Novavax’s revenue will drop starting next year. This is also true. The demand for all vaccines and medicines for the coronavirus will decrease in 2023, harming Novavax’s top line. Even so, the biotech will continue generating some sales from Nuvaxovid as it has been approved or authorized as a booster option in various countries, including the U.S. and the U.K.

On average, analysts expect the company to record $1.2 billion in sales next year. Even lower estimates that are a bit below $1 billion would be relatively impressive for a company of this size. And that’s before we factor in Novavax’s other programs. Novavax’s potential influenza vaccine generated solid results in a late-stage clinical trial back in 2020.

Novavax recently reported that its combined influenza and coronavirus vaccine generated antibody responses in a phase 1/2 trial, and it plans to kick off a phase 2 study by the end of the year. Further, the biotech’s malaria vaccine is in a phase 2b study. Unlike most other small-cap biotechs, Novavax is unlikely to rely substantially on dilutive forms of financing to fund its programs given the money it has generated (and will continue to generate) thanks to Nuvaxovid.

All these factors combined make Novavax a relatively attractive buy at current levels, especially for those investors in it for the long haul.

Streaming giant Netflix performed amazingly in the past decade, but the company has struggled this year. It lost subscribers for two quarters in a row and has had to deal with increased competition, password-sharing issues, and a challenging macroeconomic environment that isn’t helping its case.

As a result of these dynamics, Netflix’s stock has plunged, and its traditional valuation metrics look about as attractive as they have in some time, even with a recent run on the market. 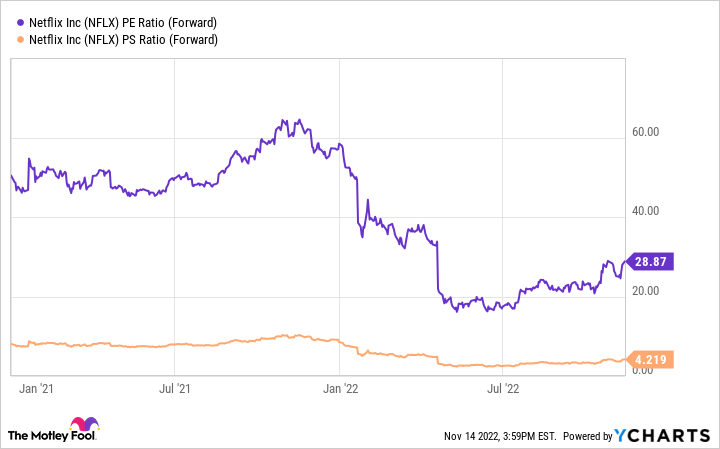 That’s especially the case since we have good reason to believe the business is strengthening compared to what we have seen this year. Netflix recently rolled out a low-price ad-supported subscription option in some of its most important markets. This could help re-ignite Netflix’s subscriber growth by attracting price-sensitive customers.

Companies that primarily rely on advertisement to make a buck are currently struggling as ad spending has decreased due to economic troubles. This dynamic could impact Netflix’s new plan in the short run. But the economy will eventually recover, and although running ads won’t be Netflix’s primary source of revenue, it will contribute somewhat.

In other news, Netflix will start cracking down on password sharing next year by allowing the main holder of an account to create sub-profiles linked to each person with whom they share their passwords. Netflix estimated that about 100 million households are accessing its platform for free through password sharing.

With its solution to password sharing, its new low-priced plan, and the advertisement it will run on it, the company will grow its subscriber base, revenue growth rates, and free cash flow. Meanwhile, streaming continues to make progress in terms of viewing time, and Netflix is one of the main beneficiaries.

The streaming industry still has a long way to go to displace linear television entirely. Netflix’s library of original content and its ability to produce new shows and movies that are immensely successful will allow the company to continue to profit from the long-term cord-cutting trend. And at current levels, Netflix looks like a good buy.

Before you consider Novavax, you’ll want to hear this.

The Motley Fool Stock Advisor analyst team just revealed their 10 Best Buys Now… and Novavax wasn’t one of them.

Stock Advisor is the online investing service that has beaten the stock market by 3x since 2002*. And the team just revealed their 10 Best Buys Now.