The market posted a small climb Thursday after December’s CPI figures showed signs that inflation continued to cool. The bulls are now fighting to push the S&P 500 back above its 200-day moving average. This technical level proved to be a stubborn point of resistance for much of 2022, and now the market faces the unknowns of the fourth quarter earnings season.

U.S. inflation fell to 6.5% in December to match Wall Street expectations and come in below November’s 7.1%. The recent CPI reading marked the sixth straight monthly deceleration after inflation hit 9.1% in June.

Wall Street upped its bet that the Fed will only lift its core interest rate by 0.25% at its next FOMC meeting at the end of January from 77% on Wednesday to 95% on Friday.

Wall Street appears to be growing increasingly confident that the Fed won’t have to do much more to cool inflation. Still, it is always worth considering the dissenting views, and remember that Jay Powell remains steadfast in his mission to drag inflation back to the Fed’s 2% target range.

Given how far inflation is from the Fed’s target range and how much the 2023 earnings outlook has already faded could mean investors should stick to stocks that proved themselves during last year’s turbulent market.

Here are two highly-ranked value stocks that crushed the market in 2022 and are poised to post sales and revenue growth next year as well. And both stocks just hit fresh highs amid the market volatility. 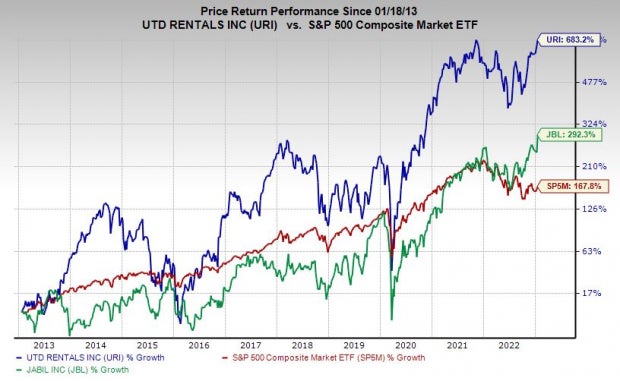 Jabil provides manufacturing services to companies in telecommunications and other industries. The firm’s client list includes the likes of Apple, SolarEdge, and other giants in critical and game-changing industries.

Jabil prides itself on operating in the background. The firm works with hundreds of the biggest brands in the world to help make everything from smartphones and home appliances to high-tech healthcare equipment. JBL is also set to benefit from a broader onshoring/reshoring push from U.S. companies and the federal government.

Jabil’s diversification helped it grow steadily for years, including 14% growth in its fiscal 2022. JBL topped our Q1 FY23 earnings and revenue estimates on December 15 and upped its guidance once again, which continues to be highly impressive given the economic outlook. JBL’s bottom-line positivity helps it land a Zacks Rank #1 (Strong Buy) right now.

Zacks estimates call for JBL’s revenue to climb 3% in both FY23 and FY24 to hit $35.5 billion. This growth comes on top 12% average sales expansion over the last five years. Jabil’s adjusted earnings are projected to climb by 9% and 6%, respectively during this same stretch.

Jabil’s industry currently ranks in the top 1% of over 250 Zacks industries, and six of the seven brokerage recommendations Zacks has are “Strong Buys.” Jabil’s dividend yields 0.4% at the moment. Plus, JBL shares surged to new highs on Friday, up 50% in the last six months and 70% in the past two years vs. the Zacks Tech sector’s -17% drop.

Despite trading at new highs and its long-term and recent outperformance, Jabil trades at a 50% discount to the Zacks Tech sector at 9.8X forward 12-month earnings. This also represents a 15% discount to its own 10-year median and 45% below its highs.

United Rentals is one of the world’s largest equipment rental firms. URI’s portfolio allows its customers, which include construction firms, utility companies, municipalities, and beyond, to rent scissor lifts, towable light towers, generators, and nearly everything else under the sun. The firm’s revenue was booming prior to the pandemic, with sales up between 15% to 21% for three straight years until they slipped in 2020.

United Rentals quickly bounced back to post 14% growth in 2021 to see it top its pre-pandemic totals. Despite the economic slowdown, Zacks estimates call for URI’s sales to soar 20% in 2022 and another 12% in 2023 to reach $13 billion as it is able to grow its customer base and raise its rental prices to adapt to inflation.

United Rentals is also projected to post 48% adjusted earnings growth in 2022 and another 15% higher EPS in 2023. Plus, it has continually upped guidance over the last year, with its improved EPS outlook for FY22 and FY23 helping it land a Zacks Rank #2 (Buy) right now.

Plus, URI authorized a new share repurchase program back in October. United Rentals also completed its acquisition of Ahern Rentals in early December to boost its reach, customer base, and beyond.