Biotech stocks have played catch-up in recent weeks, gaining ground rapidly after industry executives met with President Trump to argue for fewer regulations following a year of bilateral outrage in reaction to high-profile pricing scandals. While no promises were made, the lack of renewed Oval Office or Congressional attacks has eased bearish sentiment, encouraging sidelined players to reload positions.

Small and mid-cap biotech stocks look like better bets than blue chips in coming months because those smaller operations are more focused on getting new products to market than maximizing returns on existing inventory through higher retail prices. A review of these capitalization tiers reveals a basket of bullish basing patterns that could yield considerable upside in coming months. 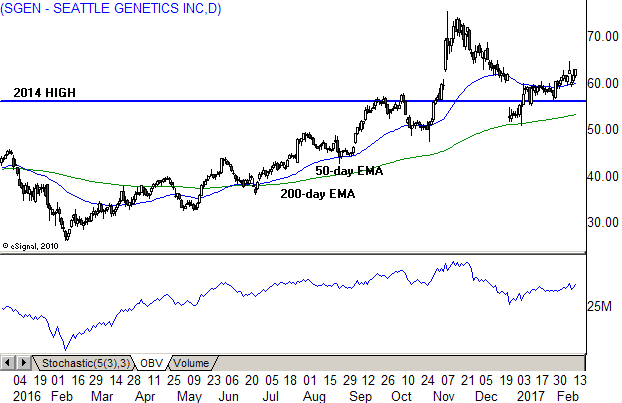 Seattle Genetics Inc. (SGEN) develops and markets a variety of cancer treatments. It topped out at $55.99 in February 2014, following a multi-year uptrend, and sold off to long-term support in the lower-30s. A 2015 recovery attempt came up short, carving a lower high, followed by a steep slide that reached a 3-year low in February 2016. That marked the bottom, ahead of a strong recovery wave that completed a 100% round trip into the prior high in September. It broke out two months later, lifting to an all-time high at $75.36 on Nov. 10.

The stock gapped down at the end of 2016 and tested breakout support, ahead of a recovery wave that’s now basing on top of the 50-day EMA. This bullish positioning sets the stage for a test at the 2016 high and possible trend advance into triple digits. A note of caution: the pullback into 2017 triggered a shareholder exodus, and it will take some time to recover lost sponsorship, telling observant market players to watch On Balance Volume (OBV) or another accumulation-distribution indicator. 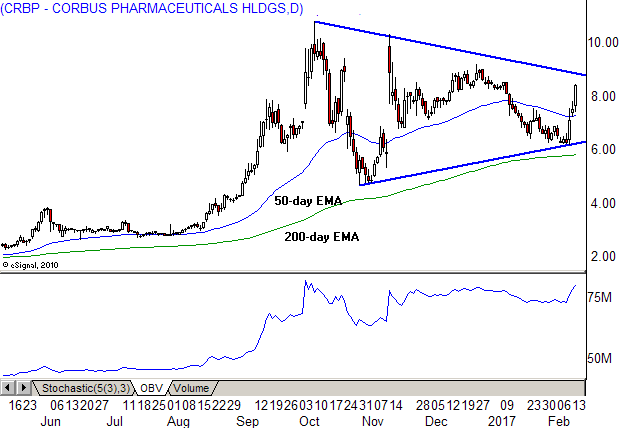 Corbus Pharmaceuticals Holdings Inc. (CRBP) focuses its efforts on therapies for inflammatory and fibrotic diseases. It came public on the national exchanges in April 2015 after being listed on the OTC market and topped out in May at $4.31. A selloff into February 2016 posted an all-time low at $1.01, ahead of a strong recovery wave that reached the 2015 high in June. A summer breakout caught a strong tailwind, lifting the stock into double digits in October.

It then sold off, shaking out weak hands with a steep decline that ended at breakout support in November. Price action since that time has carved a broad symmetrical triangle pattern, with resistance above $9.00. OBV shows enthusiastic participation by the speculative crowd, raising odds for a momentum fueled advance that could lift this small cap play above $20. 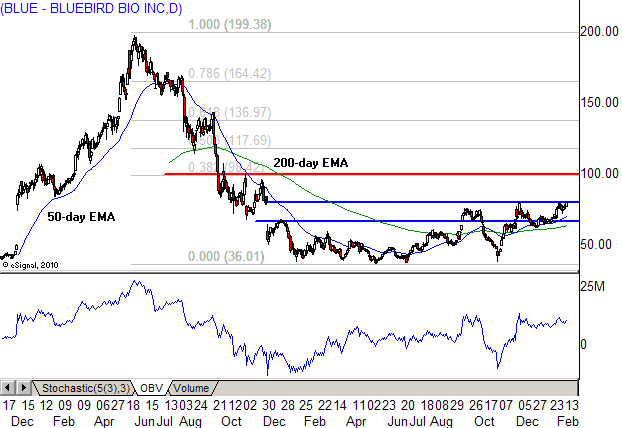 Bluebird bio Inc. (BLUE) develops gene therapies for neurological disorders, cancer, and other diseases. It came public on the national exchanges in the mid-20s in June 2013 and traded sideways into a December 2014 breakout and uptrend that topped out near $200 in June 2015. The subsequent correction unraveled those gains, dropping the stock within 10-points of the IPO in May 2016.

It turned higher into the second half of 2016, completing a round bottom, and lifted above the 200-day EMA in September. Aggressive sellers attempted to take control at that level, but their efforts failed, yielding a small scale cup and handle pattern, with resistance in the upper-70s. A breakout will clear the December 2015 gap (blue lines) and target triple digits, where harmonic resistance at the .386 Fibonacci retracement level will come into play.

Biotech stocks have roared back to life after a tough period that drew intense scrutiny from Congress, the media and the new president. This bullish transition should continue to attract buying interest, lifting the speculative small and mid-cap universe to higher ground.