Investing in stocks involves risk — there’s no way around that fact. But you can lessen the amount of risk you take on by having a diversified portfolio, one that includes steady, high-probability growth in addition to those volatile equities that could soar or sputter.

With that in mind, below I’ll highlight three stocks that have a lower risk profile than most. These aren’t necessarily investments that you can buy and forget for the next decade, but they’re also unlikely to plummet on account of some minor shift in their industry. These companies are all leaders in their respective markets, have a record of market-thumping growth, and yet their valuations won’t leave shareholders overly exposed to a large stock price decline.

Despite its nearly 30% stock price jump over the last year, fast food king McDonald’s(NYSE:MCD) remains one of the highest-yielding stocks on the Dow. The key reason for owing this business, though, is its ability to consistently throw off tons of cash.

Mickey D’s produced $6.5 billion last year, which was close to a record-high result despite the unusually rough business slump (guest traffic fell by 3% in its U.S. stores and comparable-store sales declined by 2% globally).

BREAKFAST HAS HELPED MCDONALD’S RETURN TO GROWTH LATELY, BUT ITS BUSINESS DOES FINE EVEN THROUGH INDUSTRY SLUMPS. IMAGE SOURCE: MCDONALD’S.

McDonald’s has a heavily franchised business model, as it owns less than 15% of its locations. That setup ensures a steady stream of rent and royalty fees that help cushion operating results from swings in the underlying business. Sure, franchising dilutes the potential for huge profit gains like the 36% boost that Chipotle, which owns all of its shops, managed in 2014. However, it also protects shareholders from the type of sharp swing that the burrito baron is currently going through, where profits are projected to dive by 65% this year following a food safety scare.

Kroger (NYSE:KR) is one of the world’s biggest food retailers, with over $100 billion in sales last year. While groceries aren’t a particularly profitable business (operating margin hovers around 2% of sales), the chain has demonstrated the power of slow, steady growth on stock market returns.

Those trends have helped net income more than double over the last decade to over $2 billion a year, and shareholders have been rewarded by a tripling of the stock price over that time. 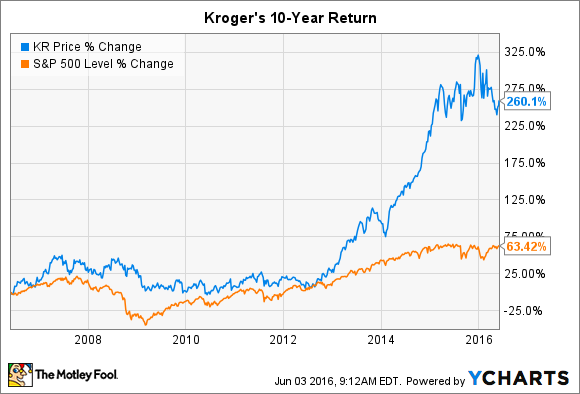 Even after that run, there isn’t much risk in dramatically overpaying for this business. Kroger is valued at 16 times next year’s earnings, which is less than Wal-Mart‘s multiple of 17 andWhole Foods‘ 23.

It pays to be the global leader in paint, coatings, and finishings — just ask Sherwin William(NYSE: SHW). Sales are up 70% since 2009, but even better news for investors is the fact that profitability is marching higher as well. Sherwin Williams has managed four straight years of increasing profit margin: The figure hit 49% of sales in 2015 from 43% in fiscal 2011.

That success is a testament to the company’s unique portfolio of well-known brands. Beyond Sherwin-Williams’ paint, it also controls the popular Thompson’s wood sealer and Minwax finishing lines. Brand power allows the company to raise prices when raw material costs spike, and the fact that it controls 75% of its product distribution through its own store footprint gives it even more say over how its products are marketed, priced, and displayed to customers.

With a forward P/E ratio of 23, Sherwin Williams is a relatively expensive stock. Yet its stranglehold on the paint market and efficient business model suggests that the business can thrive in just about any selling environment, which is the best you can ask for in a low-risk stock.