Apple Inc. (NASDAQ: AAPL) is widely expected to release its newest iPhone at some point during the fall later this year. While it’s still more than several months away, rumors are already flying as to what features the “iPhone 8,” or, as some are now calling it, the “iPhone X,” will entail.

For the many Apple fanboys and techies out there, knowing the exact details about the iPhone 8 in advance is a great matter of interest. For investors like us, it’s also a matter of business.

That is, the more you know about the upcoming iPhone as an investor, the better you can respond to impending shifts in the consumer electronics market. The iPhone, after all, goes far beyond what we see on the surface: there is an entire ecosystem of companies that benefits from its existence. 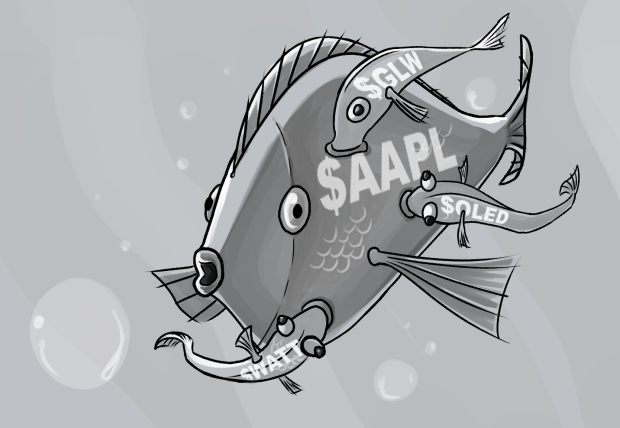 Every time Apple releases a new iPhone, the consumer electronics market veers in various directions. The bigger the design changes, the more individual suppliers will move, which obviously represents a number of unique opportunities for investors.

We’ve seen it happen before with major Apple suppliers like Broadcom (NASDAQ: AVGO), InvenSense (NYSE: INVN), and Qualcomm (NASDAQ: QCOM), and we’ll see it happen again with other firms this time around.

For those who like to trade options, these situations can be particularly compelling. Not only is the time frame relatively clear with the iPhone routinely releasing in the fall, but you also gain additional leverage on price movements through call and put contracts.

In any case, though, it pays to pay attention. This is especially true today considering the number of major design changes rumored for the iPhone 8.

That being the case, we’re going to dedicate the following space to a few potential winners (and losers) based on what we know about the iPhone 8 so far. We’ll start with what’s most likely and take a look at what’s more speculative as we move down the line.

What We Know: A Whole New Display

While ultimately nothing is guaranteed, there is at lease one aspect about the upcoming iPhone that we can count on with a high degree of certainty, and that’s an OLED screen.

As the Korea Herald reported earlier this week:

According to sources from the display industry, Samsung Display recently won the order for 60 million OLED panels.

Considering the Korean display maker had already clinched a deal to supply 100 million flexible OLED panels at 8 trillion won last April, the latest order will make Samsung the biggest supplier for Apple’s next smartphone, which is expected to be launched in the fall.

Market watchers estimate that Samsung would be supplying about 80 percent of the total demand for iPhone display panels, given that each iPhone series has sold more than 200 million units.

While not officially confirmed, the information comes from a trustworthy internal resource (the Korea Herald has a record of accurately reporting OLED shipments). Not to mention, when asked about the order, a spokesman at Samsung indirectly confirmed its existence in saying, “We can’t officially comment on anything related to the order.”

At least that’s how we read it…

Now, Samsung is obviously the big winner here, but trading the South Korean company isn’t exactly a viable option for most investors. Not to mention, Samsung is a widely diversified firm with so many other product lines that OLED wont move the needle too much.

Fortunately, investors have a better option in Universal Display Corp. (NASDAQ: OLED), the company that licenses its OLED technology to both Samsung Display and, more recently, LG Display (NYSE: LPL).

In addition to an OLED screen, the iPhone 8 is widely rumored to feature a “glass sandwich,” bigger screen, and a borderless display with no physical home button. While any combination of these rumors may be true, the underlying theme here is clear (no pun intended): more LCD glass.

Though it may not all seem too high-tech on the surface, advancements in the physical properties of glass substrate have been a key driver of modern consumer technology. Glass panels for premium smartphones need optimal optics, shatter resistance, and touch capabilities. Not just any supplier can make the cut.

In fact, there is effectively just one glass supplier that Apple can look to for the iPhone 8, and that’sCorning Inc. (NYSE: GLW). Thanks to its incredibly strong intellectual property and manufacturing footprint, Corning and its subsidiaries have managed to grab over 50% of the LCD glass market.

Not to mention, Corning’s flagship Gorilla Glass has been the go-to choice for Apple ever since Steve Jobs first demanded the product just weeks before the original iPhone’s production ramp. With a rumored “glass sandwich” design and additional screen space, Corning could potentially be providing twice the amount of substrate that it currently is for the iPhone7.

Yet while Corning would likely benefit from all this additional screen space, Taiwan Semiconductor (NYSE: TSM) might not turn out so lucky. As mentioned above, rumors suggest the removal of a physical home button, and thereby the fingerprint sensor that TSMC currently provides to Apple.

Of course, TSMC could end up providing biometric capabilities in another form (some rumors suggest a laser scanner), but the threat to its current offering is worth noting nonetheless.

What Could Be: Wireless Charging

A less likely but certainly feasible design rumor is that Apple will also be adding wireless charging to the iPhone 8, following in the footsteps of competing premium handset maker Samsung.

While speculation on wireless charging in the iPhone has been circulating for years, the feature became far more probable this week when Apple joined the Wireless Power Consortium, which governs the Qi standard in most devices with wireless charging.

Not only that, but adding wireless charging to the iPhone just makes sense. As IHS Technology analyst Vicky Yussuff points out, “The success of wireless charging adoption from Apple’s competitors is something that Apple can no longer ignore.”

Further, in a consumer survey, IHS found that a staggering 90% of the consumers want wireless charging on their next device. Eventually, Apple is bound to follow suit.

As for potential benefactors, investors are heavily speculating on Energous Corp. (NASDAQ: WATT). For over a year now, there have been rumors that Apple and Energous have been exploring a partnership for long-range charging.

While there is no hard evidence, there are currently a number of loose connections between the two firms.

For one, Billy Manning joined Energous in September 2016 as Director of Regulatory Operations. Before taking that position, Manning served as Apple’s Regulatory Certification Program Manager for seven years.

Also in December 2016, Energous partnered with longtime Apple supplier Dialog Semiconductor. In a statement to Fast Company, Energous CEO Steve Rizzone shared the following comment: “All the Energous technology will be sold under the Dialog branding and all sales orders will be going through Dialog.”

This all bodes well for Energous, especially when you consider that over two-thirds of Dialog’s revenue comes from Apple. Not to mention that in January, Energous told The Verge its first wireless transmitters will begin shipping by the end of 2017, right around the time the iPhone is expected to release.

Of course, only time will tell which of these features make its way into the next iPhone, but Energous (NASDAQ: WATT), Corning (NYSE: GLW), and Universal Display Corp. (NASDAQ: OLED) are all good speculative bets unless these rumors are ruled out.