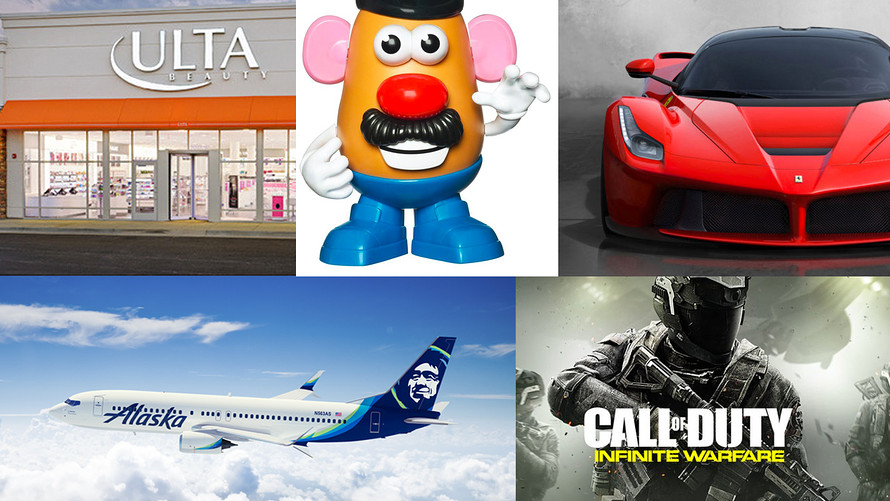 Stocks continue to climb in 2017, with the S&P 500 index up about 9% year-to-date. And some of the biggest winners this year have been consumer-related names.

It’s no surprise why. Unemployment hit its lowest levels since 2001 in May, and consumer confidence hit a 16-year high this spring.

Most investors tend to get wrapped up in Amazon.com Inc. (AMZN) when they think about plays on the American consumer market. And there’s good reason for that: Look at the company’s strong track record of outperformance and knack for grabbing headlines, as it did with its ambitious deal to purchase Whole Foods Market Inc.(WFM) for more than $13 billion.

Similarly, when many investors think of consumer stocks, they tend to think anyone who’s not Amazon is in deep trouble — retailers like Macy’s Inc. (M) Sears Holdings Corp. (SHLD) and J.C. Penney Co. Inc. (JCP) that seem to suffer chronic declines and never-ending store closures.

But don’t shortchange the consumer sector, and don’t be fooled into thinking it’s just Amazon that’s getting ahead.

These five consumer plays are just as hot — if not hotter — and continue to hold promise for the rest of 2017.

Toy powerhouse Hasbro Inc. (HAS) holds brands that many of us loved as kids, from Tonka trucks to Monopoly board games to Playskool toddler toys. But this is far from a nostalgia buy, as Hasbro has evolved with the modern toy marketplace to achieve even greater dominance over its peers.

For starters, Hasbro simply makes toys that kids (and some adults) want to play with. Hasbro’s already deep lineup of board games saw a resurgence as the hobby has returned to favor, but it just rolled out a new subscription-based service to capitalize on the craze. Similarly, Hasbro has dived headfirst into connected toys like its Love2Learn Elmo that provides interactive play via a smartphone app.

The company also continues to thrive under a lucrative and wide-reaching licensing deal with Walt Disney Co. (DIS)  that both drives new product sales and refreshes old standbys with quirky twists — as evidenced by their “Darth Tater” Mr. Potato Head.

This clearly isn’t just fun and games, since Hasbro stock has soared 40% in 2017 after consistently strong earnings that finally pushed Hasbro’s quarterly revenue higher than rival Mattel Inc.(MAT) for the first time since 2000. Hasbro already is tracking double-digit earnings growth this year, and shares are seeing strong momentum right now, but just imagine what the stock can do if it has another impressive holiday showing at the end of 2017 if consumer spending remains robust.

A leisure company of a very different flavor, videogame giant Activision Blizzard Inc. (ATVI) is the second-best performer in the entire S&P 500 (SPX)  since Jan. 1.

That’s in part because blockbuster titles like “Call of Duty” and “Overwatch” continue to rake in the cash. But it’s also because digital sales continue at an impressive clip, providing better margins than traditional retail in some cases and allowing for add-on sales after the initial purchase as gamers spend a few bucks for better gear or extra levels to play.

Consider that in the first quarter, despite having no splashy releases, Activision topped expectations as revenue surged 19% to a quarterly record. Diluted earnings per share also hit a record, all because of the digital gravy train the company is riding.

Digital channels now make up 80% of revenue for the company. After a 50% growth rate in this segment in the most recent quarter, this dynamic is only going to continue. As a result, Wall Street is very encouraged, and shares recently hit a new all-time high.

Sure, some Activision titles can cost players north of $100 with all the add-ons. But with consumers feeling very confident and a strong lineup of attractive titles, Activision shows no sign of slowing down.

If you haven’t seen a video of someone having a miserable airline experience in 2017, you simply don’t have an internet connection. But not all airlines are created equal, as evidenced by Alaska Air Group Inc. (ALK) whose Alaska Airlines ranked as The Wall Street Journal’s top U.S. airline for the fourth year running.

Great customer service and a quality frequent-flier program are big appeals. But it also helps that this company has been growing and investing in itself while other major carriers are simply trying to cut corners. In 2016 Alaska Air grew passenger revenues by 9%, and saw double-digit earnings growth — all as it completed the acquisition of highly rated peer Virgin America, which should fuel performance across 2017 and beyond.

On top of all this, Alaska Air Group is becoming a serious dividend player. Since reinstating its dividend in 2013 at 10 cents a share, the airline has tripled payouts to 30 cents quarterly. While the yield is still pretty modest, the dividend growth coupled with strong share performance in the past 12 months puts this carrier at the front of the pack.

Should consumer spending continue to stay strong, travel trends will only lift the stock higher in the months ahead.

Ulta Beauty Inc. (ULTA) is one of the few standouts in retail. While shares have taken a tumble lately, they are still up more than the broader market year-to-date and have roughly doubled since their 2016 lows.

The reasons are in the numbers. Last fiscal year, the company saw 24% growth in net saleswith a staggering same-store sales increase of almost 16%. And if that’s not enough, this year’s top line is set to grow another 20% above those strong results.

Even as its brick-and-mortar locations continue to thrive, Ulta has gotten very proactive about digital sales. E-commerce comparables grew more than 56% year-over-year for fiscal 2017 to account for 7% of total sales, and management is targeting 10% or better share of its revenue in the years ahead even as revenue at physical stores grow at a nice clip.

Admittedly, Ulta shares didn’t have a great June, sliding almost 10% from recent all-time highs just a few weeks back. But a little volatility seems like a fair trade for consistent and powerful growth in this stock, particularly with strong consumer trends as a tailwind right now.

OK, so Ferrari NV (RACE) isn’t a U.S. company. But its brand is synonymous with performance automobiles, and who likes the open road more than American motorheads? Besides, the Americas represent more than 27% of its total vehicle sales and remain the single largest segment for Ferrari.

At a high level, Ferrari has been revved up in 2017 on strong sales even as it keeps spending in check on headcount and R&D. This is a $16 billion company with only 3,300 employees, according to its last annual report. Ferrari isn’t interested in a mass-market electric vehicle, nor would it ever mess around with autonomous driving. This is a company that makes high-horsepower autos for big spenders — and it’s very good at what it does. That makes it insulated from problems in the auto industry that are plaguing legacy car makers like Ford Motor Co.(F)

Ferrari is tracking 10% sales growth this year even as overall U.S. auto sales appear to be peaking after back-to-back record years. With encouraging U.S. consumer spending and a strong U.S. dollar making this Italian sports car a more accessible import, Ferrari will be doing a brisk business in North America for the foreseeable future.