Crude’s recent return to $50 a barrel is more than a mere psychological level for the oil industry. It is the price point where the economics of shale drilling get very compelling for the best drillers. Because of that, these producers are now in the position to restart their growth engines and drive robust production and cash flow growth over the next few years.

Leading U.S. oil producer EOG Resources (NYSE:EOG) spent the entire downturn focused on the single aim of driving its costs down so that it could earn lucrative returns at lower oil prices. As a result, the company now has an enormous inventory of premium drilling locations, which can deliver a 30% after-tax rate of return at flat $40 oil. That return is lucrative enough that the company can operate sustainably at lower oil prices.

That said, where the economics start to get compelling is when crude reaches $50 a barrel. As the slide below shows, that incremental $10 per barrel doubles EOG Resources’ drilling returns on premium wells: 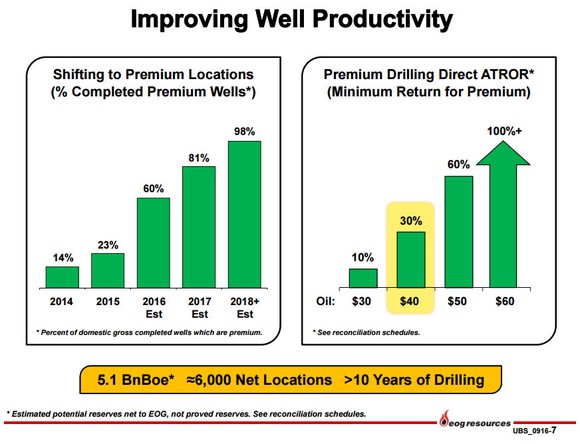 Because of that, EOG Resources can generate enough cash flow not just to maintain its production but grow at a rather brisk pace. According to the company’s recently released oil growth forecast, it is projecting to deliver 10% compound annual oil production growth through 2020 at flat $50 oil. That growth rate could accelerate up to 20% compounded annually if crude averaged $60 a barrel.

The downturn in the oil market never slowed down Pioneer Natural Resources (NYSE:PXD). Thanks to strong oil hedges, asset sales, its low debt level, and equity issuances, the company was able to deliver double-digit production growth over the past two years, including 13% this year. That said, with its most lucrative hedges rolling off and fewer non-core assets left to sell, the company needs sustainable cash flow from oil production to drive growth going forward.

However, for that to happen Pioneer Natural Resources just needs crude to stay above $50 a barrel and rise ever so slightly over the long term. According to the company’s latest projections, it can deliver 15% compound annual production growth and keep its leverage ratio below 1.0 times through 2020 in $50 oil price environment. Furthermore, if oil rises to $55 by 2018, it can deliver that growth while remaining cash flow neutral. Needless to say, if oil goes higher, so will Pioneer Natural Resources’ growth rate.

Ready to the core

Like its peers, Encana (NYSE:ECA) recently released its long-term production growth outlook. Under current assumptions, it can deliver 60% production growth by 2021 at flat $55 oil, with liquids volumes growing by a 15% to 20% compound annual growth rate. Furthermore, at $55 oil, the company could increase its cash flow by 300% over that same time frame.

Fueling this robust growth are the drilling returns Encana can earn across its four core plays. As a result of its prime positions in those areas, as well as cost reductions and other innovations, Encana expects to earn a 35% after-tax rate of return at flat $50 oil on newly drilled premium wells. While those returns are not quite as lucrative as EOG Resources’ premium wells, it is compelling enough to enable Encana to deliver exceptional production and cash flow growth at $50 oil going forward.

Shale drilling has come a long way in just a few short years. It was not all that long ago that $100 oil was thought to be the fuel driving shale production growth. However, thanks to tremendous improvements in drilling techniques and the industry’s cost structure, shale drilling is now wildly profitable at $50 a barrel. This is why EOG Resources, Pioneer Natural Resources, and Encana expect to deliver robust growth over the next few years now that oil has returned to that crucial level.

Matt DiLallo has no position in any stocks mentioned. The Motley Fool owns shares of EOG Resources.