And high-yield investments become even more important when investors use dividend reinvestment plans (DRIPs). With a DRIP, investors can put their money to work for them.

According to Money Morning Executive Editor Bill Patalon, finding the best high-yield stocks to buy and then reinvesting dividends could make you millions…

“By plowing your dividends back into more shares, DRIPs make it easy to harness the power of ‘compounding’ – taking a smidgeon of capital and putting it to work,” Patalon said.

If you purchased 100 shares of a stock at $150 per share with a 3% dividend yield, your investment would be worth roughly $83,500 after 30 years. That’s if the company raises its dividend 2% annually and the stock climbs 5% annually, both very conservative growth figures.

But if you reinvested those dividends under those same criteria, your shares could be worth more than $116,000 in the same time. That’s a $32,500 difference.

With interest rates in the United States near zero, banks may only pay you between 0.03% and 0.05% for a savings account. Because inflation in the U.S. was 1.1% in August, retirees need a way to keep up with the rising costs of goods and services after they stop working.

Finding the best high-yield stocks to buy can help.

Just take a look at the current dividend yield from Dividend Aristocrats (companies in the S&P 500 that have increased dividend payouts every year for the last 25 years). 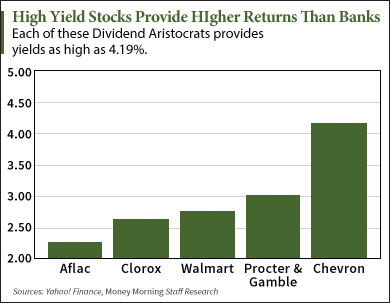 Each of these companies provide a dividend yield of at least 2.28%. Compared to the 0.05% a bank may pay you, that’s a great return.

Those are two great reasons to own high-yield stocks. But it gets even better…

The best part of owning high-yield stocks is that they provide you with income even when the markets are volatile. Consistent, strong dividend payments can also offset losses in your portfolio when the markets fall.

Altria currently offers a dividend of $0.61 per share, which is a yield of 3.97%. In comparison, the yield of a 10-year Treasury is 1.69%. Altria is a global brand, and its products are bought in any economic condition.

Altria has been able to raise its dividend at regular intervals since 1989. And with diverse revenue sources within the tobacco industry, MO should continue to be one of the best high-yield stocks to buy.

Over the last five years, the MO stock price has climbed 130%. In comparison, the Dow Jones Industrial Average is up 68% during that same time.

In 2013, Altria entered an agreement with Philip Morris International Inc. (NYSE:PM) to sell e-cigarettes. Under the 2013 agreement, Philip Morris (PMI) would have the exclusive right to sell Altria e-cigarettes overseas, while Altria could sell two of PMI’s “heat-not-burn” tobacco products in the United States.

Altria and PMI reached a new agreement in 2015, where they will share research, development, and technologies to jointly produce new e-cigarettes.

This is great news for MO shareholders, as e-cigarettes could net Altria billions in sales…

Since August 2013, McDonald’s Corp. (NYSE: MCD) has raised its dividend four times. McDonald’s currently pays its shareholders $0.94 per share when it distributes dividends, which is a yield of 3.28%.

McDonald’s currently pays out 67.43% of its profits to investors, which means it’s committed to keeping shareholders happy.

Same-store sales didn’t grow as quickly in Q2, but they still climbed 1.8%.

One of the biggest concerns with restaurant stocks is that people will dine out less in times of economic uncertainty.

But if you own MCD stock, you have nothing to fear.

Even during economic downturns like the 2008 financial crisis, McDonald’s proved it was one of the best high-yield stocks to buy.

Not only is PepsiCo Inc. (NYSE: PEP) one of the best high-yield stocks to buy, it is part of the elite Dividend Aristocrat club. Over the last 43 years, Pepsi has raised its dividend without interruption.

It’s true that the soda industry is facing challenging times. According to Fortune, sales of carbonated soft drinks have dropped for 11 consecutive years in the United States.

But Pepsi is more than a soda company…

It has a huge snack portfolio, which includes:

In Q2, Frito-Lay North America saw revenue growth of 4%. And that growth should continue, as the 2016 Convenience Store News Industry Forecast Study projected salty snacks will increase by 7% in total industry dollar sales.

CEO Indra Nooyi said in the Q2 earnings call that Pepsi would continue to expand its snack portfolio and focus on premium and healthy offerings.

According to FactSet consensus estimates, the PEP stock price has a one-year price target of $117.74. From today’s opening price of $107.24, that’s a potential profit of 9%.

So not only is PEP a high-yield stock, but the PEP stock price also has significant room to climb and net you solid gains in the next 12 months.