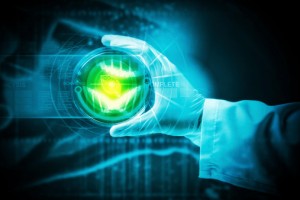 However, many biotech companies having grown into large-cap companies with market caps of $50 billion or more. Some have grown so large, that they can easily pay dividends, while sufficiently investing in growth initiatives. Thus they can be called biotech dividend stocks.

With a P/E ratio of just 6, Gilead looks very attractive for its low valuation and 3% dividend yield. However, one of the reasons the stock is so cheap is that revenue and earnings per share are declining.

For example, 2016 sales and earnings per share dropped by 7% and 16%, respectively. The reason? Its flagship HCV drugs, Harvoni and Sovaldi, are seeing enormous pricing pressure. HCV product sales are forecast to be in a range of $7.5 billion to $9 billion this year, down from $14.8 billion in 2016, and $19.1 billion the previous year.

As a result, Gilead is looking outside HCV for growth. For example, it has a robust HIV portfolio, which generated 17% revenue growth last year. HIV treatments  now account for 45% of Gilead’s total revenue.

Oncology is another promising area for Gilead. One of its key oncology drugs, Zydelig, has grown more than seven-fold in the past two years.

Until its pipeline investments pay off, Gilead shareholders are paid well to wait for the turnaround. Although Gilead has only paid a dividend since 2015, it has increased its dividend each year since, by an average rate of 10% annually.

AbbVie is no stranger to dividends. Before it was spun off from Abbott Laboratories (NYSE: ABT), the combined company had raised its dividend for more than 30 years in a row.

AbbVie has continued to hike its dividend impressively since the spinoff. Last year, the company raised its dividend by 12%.

The company’s strong dividend growth rate is due largely to the success of its flagship product, Humira, which accounts for more than 50% of total revenue. Humira sales rose by 16% in 2016, to $16 billion.

Growth from Humira fueled double-digit earnings growth for AbbVie in each of the past two years. Even though Humira has lost patent protection, AbbVie expects it to continue generating strong growth from multi-purpose application. By 2020, AbbVie projects Humira will be an $18 billion drug in terms of annual revenue.

Going forward, AbbVie will continue investing in its pipeline to reduce its dependence on Humira. It has eight late-stage drugs that are expected to generate a total of $30 billion in annual revenue by the end of the decade.

Hematology is a particularly promising area. Imbruvica sales increased by more than 100% in 2016, to $1.8 billion.

Overall, AbbVie expects 14% growth in adjusted earnings per share in 2017.

Amgen’s core therapeutic areas are cardiovascular disease, oncology, bone health and neuroscience. The company is very successful in its core operating segments—in 2016, adjusted earnings per share increased by 12%. Revenue increased 6% for the year, and the company successfully expanded profit margins through cost reductions. In the first quarter, Amgen’s earnings rose another 9%.

One concern for investors this year is Amgen’s patent losses. Sales of one of its key products, Neupogen, declined more than 30% in 2017, from escalating competition in North America. Another concern is Enbrel, which posted a 15% drop last quarter.

Fortunately, the company can overcome these declines with growth in new products. Several products grew at a 20% rate or better last quarter, including Prolia and Kyprolis. Another promising product, Sensipar, was up 15% last quarter. In all, Amgen’s new-product portfolio contributed nearly $3 billion to sales last quarter, and are now more than 50% of total revenue.

With a nearly 3% dividend yield, Amgen offers a unique mix of income and growth potential.