One group of experts states that the markets are ready to crash, another that they’re ready to soar to new highs. Which group is one supposed to believe? For starters, the naysayers have the odds stacked against them as every so-called market crash has turned out to be a long-term buying opportunity. We view stock market crashes as once-in-a-lifetime buying opportunities. The smart money always swoops in and buys top-quality stocks when there is blood in the streets and the dumb money sells right at the bottom.

Therefore, our advice is that you should never listen to those who continuously say that the market is going to crash. Had you listened to most of these experts, you would have been bankrupted several times over. What is even more disturbing is that outlets like CNN continue to provide air time to these individuals despite their abysmal track record, clearly proving that you don’t have to know anything to be labelled a ‘financial expert.’

Regardless of the market, one needs to be cautious when so-called expert’s start issuing targets that seem to match the ravings of Ward-12 inhabitants. Now we have another expert who is stating that the Dow Jones Industrial Average could trade to 30K. Is this expert full of hot air too? Well, there are some notable differences. Schiller uses the word “could” and, more importantly, he has a track record on which to lean.

It’s not very often that a Nobel Prize-winning economist who is known for his bearish calls turns extremely bullish. Last week, Professor Robert Shiller of Yale, who called the housing collapse ten years ago, proclaimed that stocks could rise another 50 percent in the next few years based on his latest research. Meaning Dow 30,000! That got the attention of many folks, especially the Wall Street analysts, many of whom don’t understand this market. Shiller accurately saw the housing bubble and predicted that it would end very badly, as it did. He also co-developed the S&P/Case-Shiller index, which is a benchmark for measuring housing prices around major US cities.

Dow 30k could be a possibility and here’s why:

Based on our anxiety index and various other measures of market sentiment, the masses are anxious. The Crowd has not embraced this bull market. Not once this year has the number of individuals in the bullish camp ever made it to the 60% mark. In fact, most individuals are opting for the neutral camp. No bull market has ever ended without the mass participation, and we don’t think this stock market bull will be any different. In fact, for the past several years we have gone on record to state that every major pullback should be viewed through a bullish lens. 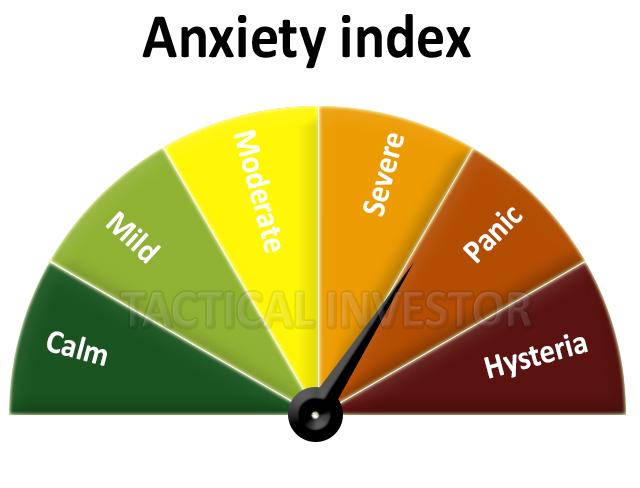 We tend to pay more attention to the SPX, and there is a case slowly building up for the SPX to trade to the 2900 -2950 ranges with a possible overshoot to the 3040 ranges. If the SPX moved to such levels, it could be comparable to the Dow trading to 30k. Keep in mind that no market trades in a straight line and the higher a market trends, the more volatile the ride becomes; expect a lot of volatility along the way up.

Having said that we need to state that our goal has never been to focus on absolute targets, instead, the focus is on the trend and market sentiment. If the trend is up, then we view strong pullbacks as buying opportunity and vice versa.

Every major bull market experiences at least one sharp to very strong correction, before topping out. This sharp correction provides astute players with an entry point for a spectacular rally that leads to the feeding frenzy stage; at this stage, the masses have finally decided it’s time to join the party, and then as they say the end is usually close at hand. After that, the market can experience a correction/crash ranging from 30%-50%.

A moment’s insight is sometimes worth a life’s experience.