When dividend stocks dip in price and go on sale, they can create buying opportunities for long-term investors. This year, in particular, has been a rough one for all kinds of stocks, with the S&P 500 falling 14% since the start of January. Some stocks are at levels they haven’t been at in years.

Takeda Pharmaceuticals (TAK -0.04%) and Verizon Communications (VZ -0.86%) are both at multi-year lows, and here’s why they could be attractive options for a $5,000 investment.

Takeda Pharmaceuticals is one of the largest drug companies in the world. Its products cover multiple therapeutic areas, including gastroenterology, rare diseases, oncology, neuroscience, and others. For the year ended March 31, the Japanese company reported sales of 3.6 trillion yen ($29.4 billion), which rose 12% year over year.

One reason the stock has been struggling in recent years is that it made a mammoth $62 billion acquisition of biotech company Shire in early 2019, which ranks as one of the largest healthcare mergers in recent history. Shire’s complementary portfolio would supposedly make Takeda a larger, more successful business. But one of the reasons I haven’t been so excited is that the surge in the growth rate was temporary. Meanwhile, the company is still trying to get its debt down after taking on the big purchase. 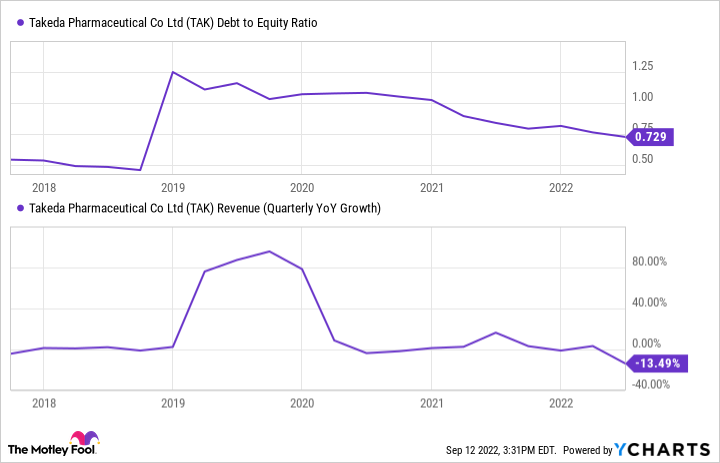 Takeda has been paying down its debt, so it is a bit less risky than it was in previous years. And the decline in sales has come as a result of challenging conditions due to the pandemic. Amid a return to normal, Takeda’s growth rate could start to improve, especially against soft numbers from the previous year.

The stock yields 5.3% today, which is more than three times the 1.7% that the S&P 500 averages. On a $5,000 investment, you could be earning $265 each year from the stock. For the current fiscal year, the company projects that its reported per-share profit will total 188 yen, while its annual dividend per share will be 180 yen.

That would put its payout ratio at 96% of profits — which is quite high. So there’s some risk with Takeda’s dividend, but the stock itself could still make for an underrated buy. Although Takeda has occasionally dipped lower in price than where it is now, it’s still around the lowest it has ever been on the New York Stock Exchange (the company’s American Depository Shares were listed there in late 2018).

This may not be suitable for risk-averse investors, but given how low the healthcare stock is trading right now and the high yield it provides, this could be a calculated risk worth taking for more risk-tolerant investors. The conditions in the global economy with respect to supply issues look to be improving, and that should bode well for Takeda.

Telecom giant Verizon is also a top company in its industry. With its shares trading at around $43 per share, you have to go back about 10 years to find a time when the stock was trading much lower than it is now.

The stock has been under tremendous pressure this year after a disappointing showing in its most recent quarterly results. For the period ended June 30, the company’s operating revenue rose by a meager 0.1% to $33.8 billion. And its postpaid phone net additions were just 12,000 — well short of the 144,000 that analysts were expecting. It’s also nowhere near the 813,000 net additions that rival AT&T reported over the same period.

Verizon also scaled back its guidance for the year, projecting that its wireless service revenue will rise between 8.5% and 9.5%, compared to an earlier forecast of between 9% and 10%.

The positive is that the company is still generating growth, and Verizon’s payout ratio is manageable at around 50% of profits. The company’s bottom line may face some challenges as consumers look to cut costs amid inflation, but the dividend pays you handsomely in the meantime. Verizon’s yield is now up to 6.1%, and it could be one of the best income stocks to buy right now. On that kind of payout, your annual dividend income on a $5,000 investment would total more than $300.