Readers of Money Morning who acted on the Apple supplier stocks recommendations I made just four months ago have made as much as 55%.

On Dec. 7, I shared seven Apple supplier stocks I thought would outperform broader markets. Each of these stocks had a high exposure to Apple – that is, a large percentage of their business comes from supplying Apple.

My expectation was that as the hype over the upcoming iPhone 8 began to build, forecasts of blockbuster iPhone sales would follow. Because this year is the 10th anniversary of the iPhone, the new models are expected to have at least one gotta-have-it feature that will spur a tremendous wave of upgrades. 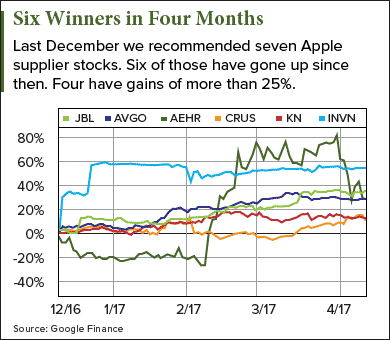 The anticipation of a big sales boost from the iPhone 8 has helped push Apple stock to new all-time highs in recent weeks.

But I knew that as Wall Street came to realize how those higher sales also would boost the biggest Apple suppliers, their stock prices would rise as well.

The biggest winner was InvenSense Inc. (NYSE: INVN), which is up a little more than 55% since I shared those suppliers with readers on Dec. 7.

INVN stock jumped just days after that article appeared on rumors that Japanese electronics company TDK Corp. was in talks to buy InvenSense.

The rumors proved to be true. TDK announced Dec. 21 its intentions to buy InvenSense for $13 a share, or $1.3 billion.

There was some luck involved in that pick – a major acquisition deal is a quick road to profits – but of the seven Apple Inc. (Nasdaq: AAPL) suppliers I recommended in December, six are in positive territory. Four (including INVN) are up more than 25%.

Today I’ve got two more Apple supplier stock picks for you. First let’s take a look at each of December’s other winners.

How Our Apple Supplier Stock Picks Have Performed

The first stock I have is a longtime Apple supplier, Micron Technology Inc. (Nasdaq: MU). Micron is best known for its memory products. It owns brands like Crucial, Lexar, and Ballistix.

Micron is one of the largest memory manufacturers in the world, ranking third for DRAM products and fourth for NAND flash memory.

Micron is “safer” than the Apple suppliers listed above because only a small portion of its business depends on Apple. But a surge in sales from the iPhone 8 will give Micron a boost.

“The most significant and strongest growth driver for this year’s memory chip makers is the 10th anniversary of the iPhone range, while last year Chinese smartphone makers drove the growth,” Sean Yang, an analyst at Taipei-based research firm DRAMeXchange, told the Nikkei Asian Review last week.

MU stock has been on a great run – it’s up more than 150% over the past year – but rising demand for memory is expected to keep Micron very busy over the next couple of years.

That’s because Micron supplies not just makers of mobile devices like Apple, but also companies building out their cloud services. In fact, sales are growing at an astounding rate.

According to Morningstar, the company’s five-year growth forecast is 110.2%. (The five-year forecast for fellow chipmaker Intel Corp. [Nasdaq: INTC] is just 5.3%.)

And while the trailing price-to-earnings ratio is a bit high at 47, the forward P/E is just 6.4.

According to FactSet, the one-year consensus price target on Micron stock is $39.04 – a gain of more than 44% from the current MU price of about $27.

The other stock I’m looking at – Energous Corp. (Nasdaq: WATT) – is a moonshot pick. If it takes off, you could do much more than double or triple your money.

Energous is a small, 75-person company that specializes in wireless charging technology. That means its transmitters can send a charge to your smartphone or tablet from a distance – eventually up to 15 feet.

The company has hinted that it’s working with Apple, and one of the rumored features of the iPhone 8 does happen to be wireless charging. If Apple indeed chooses to use the Energous technology, the stock will skyrocket.

But wireless charging may not be ready for the iPhone. And even if Apple is planning on putting wireless charging in a future iPhone, Energous may not end up being the supplier. Recall that other wireless charging rumors have linked Apple and Broadcom.
Still, the potential of the company’s technology has piqued the interest of analysts. Even without Apple as a customer, Energous could make waves in the consumer tech sector. Eight of them raised their price targets following the most recent Energous earnings report on March 23.

According to FactSet, the consensus one-year price target on WATT is $22.93 – more than 50% the current price of just under $15 a share. But it’s the long-term earnings estimates that caught my eye.

This is clearly a high-risk, high-reward play, so don’t bet the farm on it. But a small investment could pay off big.