Like cotton candy in a rainstorm, the profits of the last two years are vanishing with each new dark cloud.

“It’s all a mess,” they say. “The markets are entirely unpredictable and erratic.”

That’s a scary notion. But it explains why some $5 trillion is sitting on the sidelines in cash these days. Investors are paralyzed with fear and uncertainty.

It raises a question… the eternal question.

The answers to those questions dictate our strategy.

Of course, there are many ways to value the stock market. But just three metrics form the foundation for all the other variables. After all, when we’re buying a stock, we’re buying the value of its future profit stream. Growth and profits are where we need to focus.

Of course, a simple price-to-earnings multiple is the classic way of measuring a company’s price tag relative to its profits. It tells us how much the market is willing to pay for each dollar of profit the company is generating. The more growth the market expects… the higher the figure.

At that level, investors were willing to pay $35 to own just a dollar’s worth of profit. It was a sky-high figure that factored in immense growth. Or, much more likely, it factored in the maddening stimulant of dirt-cheap money that skewed the rational price of profits.

With companies arbitraging debt for dividends and buybacks… profits weren’t the key. Getting access to the free-money spigot was.

Of course, that spigot has a big, fat thumb on it these days. Money is still cheap, but not like it was.

It explains the sizeable dip in the market’s average P/E. It’s down to 18.5.

It’s a big dip… but does that mean stocks are cheap?

So if you believe we’ve seen the death of low rates, stocks are still expensive. But if you’re like us and think the global economy will collapse if Powell keeps pushing rates higher, then things are actually a bit cheap… assuming he’s smart enough to pull back.

We have our doubts.

Another way of looking at things has been dubbed the “Buffett Indicator.” It simply measures the stock market against the nation’s GDP. It’s very basic, but it paints a vivid picture.

Over the last 20 years, the stock market has traded at about the same level as GDP. Each time it stretches above the GDP figure (as investors price in extreme growth), the numbers eventually converge.

That’s where the bad news comes in. At today’s prices, we’re still a standard deviation above average. Even with this year’s pain, there’s likely more trouble ahead.

If rates are driving this market (and honey, they are), then we must pay particular attention to the data. The problem here is that the trends are so slow-moving that determining an average is quite tough.

The chart below shows a 6% historical average for the benchmark 10-year Treasury. But is that fair? Rates have been at 6% only a few times in history.

Over the last two decades, 3% is much more in line with reality. Where we see things going depends on whether we believe the era of low rates is coming to an end. 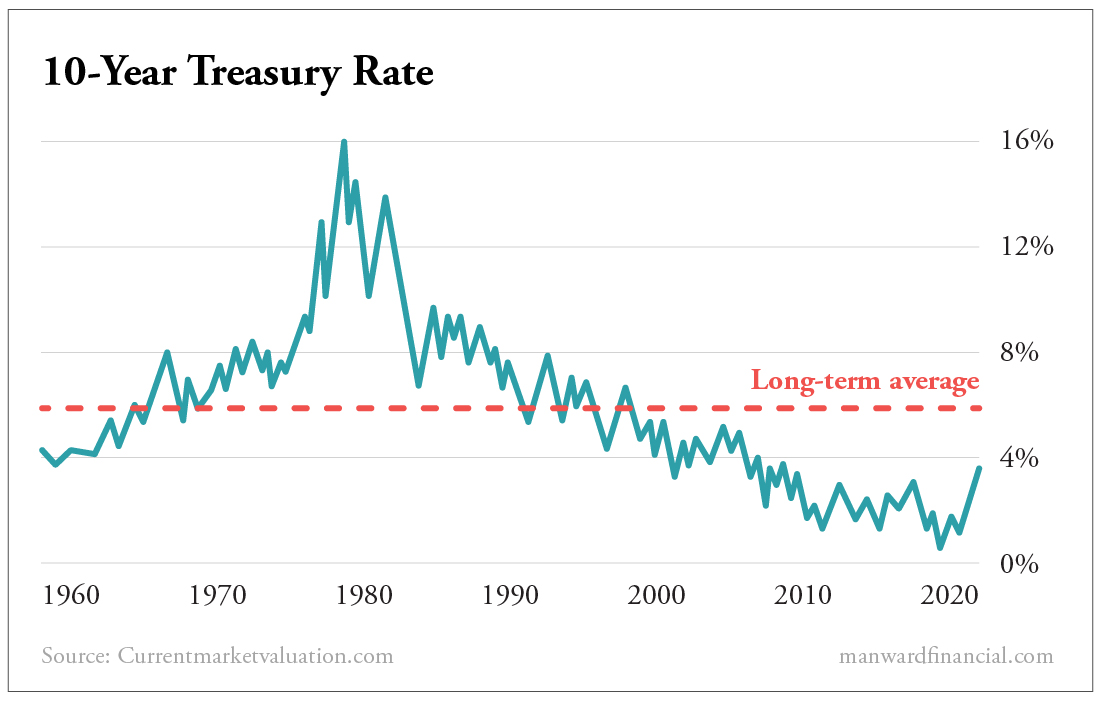 It’s the same with stocks. The chart below makes stocks look quite expensive when compared with the market’s long-term average. But is growth easier to come by in 2022 than it was in 1960? Many would say the premium is fair. 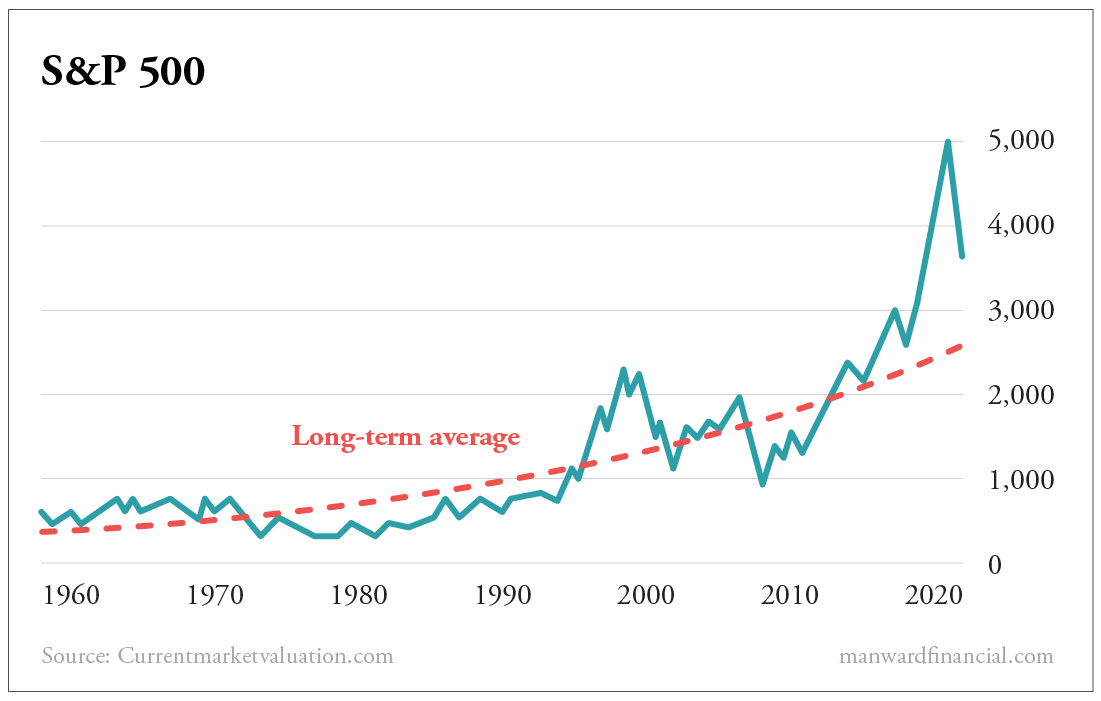 Even so, when we compare the 10-year Treasury with the value of stocks over the long term, we get a figure that is smack dab in line with the historical average.

Put it all together and it tells us one very simple thing.

The market has not lost its mind. It’s simply doing what we’ve long said it would do.

It’s following interest rates like a gander trails his goose.

The higher the Fed takes rates, the lower stocks will go. That’s simply the nature of things – long term, short term and every term in between.

The real question we must ask is…

More on that soon.