The Volatility Index, or as it’s more commonly known, the VIX, is the most powerful trading indicator for the broad markets. And it can be one of your greatest ways to leverage – and hedge – your portfolio.

But too many investors don’t really understand how to use its power to their greatest advantage.

It’s actually not too complicated once you understand what the VIX is and what it isn’t.

The great news is I’ll show you everything you need to know about trading the VIX like a pro in an incredibly simple and effective way, with a clear strategy and widely accessible tools.

I’ll walk you through how to use this incredible trading tool to grow and protect your portfolio.

So, let’s get started…

All investors should know how to trade the VIX.

While most investors are scrambling to figure out whether the market is headed up or down, I use the VIX as a useful second opinion the markets, basically an “investor fear gauge” that reinforces the movements I already see in the markets.

As an options trader and a market maker, this was an indicator I checked several times a day and made adjustments to positions accordingly.

Eventually, I helped develop the first VIX instruments available to traders and investors today. For almost 20 years, the VIX has been considered one of the most valuable market indices.

The VIX has been a crucial part of my success as a trader because this indicator not only gives you an idea of how uneasy people are about the markets… it tells you whether or not the markets have reached an extreme level of sentiment – either bullish or bearish – which typically indicates a market reversal is coming.

That kind of knowledge – and knowing what to do with it, when – is a very powerful tool in any trader or investor’s arsenal.

But before we get into how to trade the VIX, you need to understand what the VIX actually is.

What the VIX Indicator Measures

There’s a common, and costly, misconception that the VIX is simply a volatility barometer. The reality is that the VIX doesn’t measure actual stock market volatility at all.

You see, the VIX tracks the trading in options on the S&P 500 to indicate how investors expect the market to move over the next 30 days. This makes it a widely useful measure of overall market risk.

The VIX, then, is really a reflection of the price of calls and puts on the S&P 500.

In fact, experts view the VIX as possibly one of the best contrarian indicators in the business, which means it usually has an inverse relationship with the markets. It helps determine when there is too much optimism or fear in the market.

How to Read the VIX

The VIX is a calculated index, much like the S&P 500 itself, but it uses the price of options on the S&P 500 (like I explained) instead of stock prices, and then approximates how volatile those options will be between now and the option’s expiration date.

Although it isn’t expressed as a percentage, it should be understood as one. The VIX percentage points translate to the expected positive or negative annualized movement in the S&P 500 over the next 30 days, for one standard deviation.

So, for example, a VIX reading of 22 translates to implied volatility of 22% on the SPX. This means that the index has a 66.7% probability (that being one standard deviation) of trading within a range 22% higher than – or lower than – its current level, over the next year.

Also, a VIX reading of 15 implies the S&P could swing higher or lower by 15% over the next 12 months, or about 4.33% over the next 30 days (since volatility doesn’t grow linearly over time, the annualized number is not 12 times the monthly estimate but rather about 3.5 times).

The scarier the broad market decline the higher the VIX tends to go – hence its reputation as the “fear gauge.”

To better understand what these figures actually represent, a VIX reading greater than 30 is generally associated with a large amount of volatility and uncertainty, while values below 20 generally reflect less stressful times. The index has a 20-year average of about 19.22.

During the worst part of the 2008-2009 market collapse the VIX soared as high as 80, and it hasn’t nearly approached that number since then. 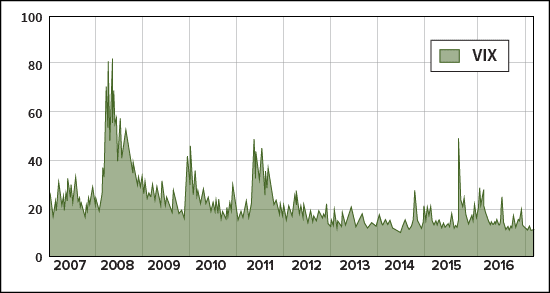 Movements of the VIX are largely dependent on market reactions. On June 13, 2016, the VIX spiked more than 23% due to a global sell-off of U.S. equities. It closed at a high of 20.97, the highest level in over three months.

This happened because global investors saw uncertainty in the market and decided to take their gains out, causing a rise in supply and a drop in demand, which in turn increased market volatility.

In late August 2016, for instance, markets were seriously concerned about how severe the global equity market mayhem could become. So on Aug. 24, 2016, the VIX opened above 50, a level not seen since the 2008 financial crisis.

Since then, the VIX has stayed below 30, but it spent most of the rest of 2016 at higher levels than the year before, generally in the mid-teens.

The Key to Unleashing the VIX’s Power

There’s still one question that continuously comes up regarding the VIX.

First, “selling calls” is a hedge against falling stock prices. But when you sell calls against a position you hold, you only collect the “premium,” or payment that you sold the calls for.

No matter how far the stock falls, your downside protection is limited to the money that you collected for selling the calls, meaning this hedge has limited value.

On the other hand, by “buying puts,” you can hedge or profit from a steep and lengthy drop in the price of the underlying stock, and the larger the drop, the more money you make.

More importantly, in a sell-off or outright panic, investors and traders are more inclined to buy puts as protection or as a speculative position without too much concern for the prices they have to pay.

Historically, about 20% of the time, an unusual situation occurs where option premiums and the VIX actually move in the same direction as the S&P 500. For example, if the market has been on a long bull run without a recent pullback, investors might become increasingly concerned that a correction is overdue and start bidding up put prices, leading to a higher VIX at the same time as the S&P 500 is rising.

Think of the VIX as insurance for your investments. Like homeowners or auto insurance, when an asset (stocks) you own is damaged or even destroyed, you are reimbursed.

What’s even better with the VIX is that it can be used to not only protect your investments, but as a fantastic profit tool as the market increases in volatility.

And now is a great time to play the VIX.

This is a time you can be very confident that an investment recommendation is going to pay off. Markets always go down. Fear always returns. There’s always another crash.

It’s only a matter of when.

Investors who have followed my advice trading the VIX in the past are glad they did.

How to Trade the VIX

There are a few options for investors who want to trade the VIX when market volatility surges.

Since there is no direct way to trade the VIX, VIX options (whose values are based on VIX futures and not the VIX itself) are offered. There are 24 other volatility exchange-traded products (ETPs) for the VIX. So, in total, there are 25 ETPs that allow you to go long, short, or anywhere in between on volatility.

I like VXX the best, as it will surge more during periods of uncertainty.

VXX and VXZ are cheap to own and trade, and they make for a fairly good, simple alternative for investors looking to hedge their risks and protect their profits.

Any worries about the central bank tapering back on bond purchases, a realization that the bull market in stocks is over, or any news, like a government shutdown, that could cause stocks to fall is going to contribute to escalating levels of investor fear.

That’s going to cause the VIX to spike – and the VXX and VXZ with it.

Another way to make money using the VIX is by hedging against market extremes. As a contrarian indicator, low readings on the VIX are bearish, while high readings are bullish.

One strategy is to buy puts when the VIX is low. By doing this, you’re making a bet that the market is overly bullish and near a top.

As I previously mentioned, most often, the movements in the VIX are inversely correlated to the S&P 500 and the market in general. That makes it essential to trade S&P 500-based products with plenty of liquidity, because you don’t want your money tied up when you really need it.

For VIX traders, holding positions for big moves can sometimes be foolish. Until the VIX stops trading in narrow bands, traders should take smaller profits and be quicker on the trigger when their trades are in the black.

Investors can always keep a deep out-of-the-money position in calls if they want a longer-term, investment-type play.

Although the VIX is a stock market volatility index, traders and investors need to understand that it’s really no different than any other investment instrument – meaning that it, too, is vulnerable to structural changes and the dynamics of constantly moving market expectations.

You should always understand what’s going on with the instruments you invest in and trade… and avoid at all costs getting blindsided by moves that you could have anticipated.

Investors who want to trade the VIX should keep in mind that VIX-linked products are short-term trading tools for active traders who know the risks. That’s why it never hurts to have the help of an experienced Wall Street professional.

And that is my goal – to be the professional who not only helps you get a shot at the opportunities that the insiders get, but show you how to begin to think like a professional trader, so you can profit like a pro for yourself.