After the stock market’s dismal performance in 2022, investors are looking for a reprieve. The S&P 500 finished the year down 19% and the Nasdaq lost 33%, with a number of tech stocks falling considerably further.

Though most economists are forecasting a recession this year, stocks have started 2023 on an upswing, gaining after the December jobs report showed unemployment remaining low, but wage growth slowing — exactly what the Fed seems to want — and a continuing decline in inflation in the December Consumer Price Index (CPI).

So will a new bull market begin in 2023? It’s impossible to know for sure, but here’s what investors need to watch.

The Federal Reserve dominated the narrative last year as its aggressive rate hikes caused stocks to tank, especially unprofitable growth stocks with stretched valuations. The reason for the rate hikes was unusually high inflation, which peaked in the CPI at 9.1% last June on a year-over-year basis.

The faster inflation falls, the more likely it is that the Federal Reserve will ease off on rate hikes since its goal is to bring it back down to 2%. Fed Chair Jerome Powell has said that rates would remain elevated until inflation reaches that goal.

While the CPI is the inflation measurement most investors tend to follow, the Fed prefers a different gauge: personal consumption expenditure (PCE), which it considers more comprehensive than the CPI. The most recent PCE report in November showed that the index rose 5.5% year over year.

In its December projections, the Federal Reserve called for PCE inflation to decline to 3.1% by the end of 2023, approaching its long-term goal of 2%.

Keep an eye on PCE. If it’s trending below the Fed’s forecast of 3.1% by the end of the year, that will be bullish for stocks.

All eyes have been on the federal funds rate over the last year, which is now at 4.25%-4.5%. But that’s not the only interest rate that matters. Treasury yields also influence stocks, and they tend to have an inverse relationship. When bond yields rise, stocks tend to fall, and when bond yields fall, stocks tend to rise.

Though the Federal Reserve has forecast another 75 basis points in rate hikes this year, the interest rate on the benchmark 10-year Treasury Note has actually fallen substantially from its peak in October at 4.33% all the way to 3.45%. That shows that investors believe the risk of interest rates remaining elevated for a long period of time has gone down, and it could also signal that stocks have become more attractive. The decline in interest rates has come as inflation has cooled off.

It’s also worth watching the yield curve, in particular the difference between the 2-year and 10-year Treasury yields. Normally, the 10-year has a higher yield than the 2-year, which is typical for longer-dated bonds. But the yield curve has inverted, meaning that the 2-year now pays more than the 10-year, as the chart below shows. 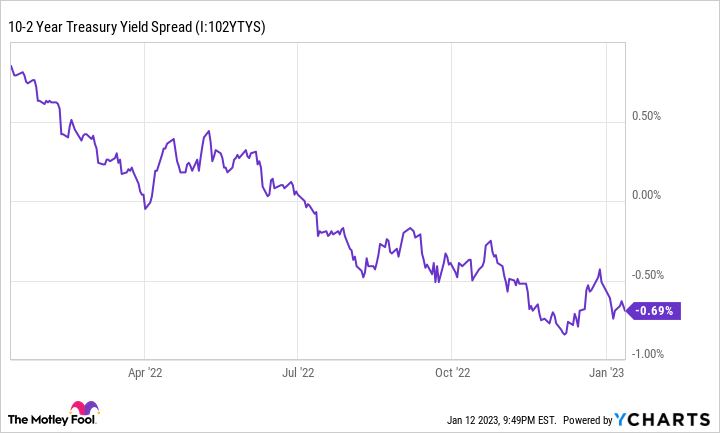 The yield curve tends to invert when investors expect the federal funds rate to fall over time and see more risk in the short term than the long term. Historically, an inverted yield curve has been a leading indicator of a recession, though it’s unclear if that will hold true this time.

Still, a normalization of the yield would be seen as a positive by investors.

If the Fed stops hiking the federal funds rate, that could bring interest rates down further, which would also be bullish for stocks.

The third component that will determine whether a new bull market will start this year is corporate profits. In fact, since the stock market is ultimately a measure of how investors are valuing future corporate profits, that may be the most important factor for when the next bull market starts.

S&P 500 earnings actually fell in Q2 and Q3 of last year, declining 10% and 3%, respectively. And analysts expect another decline in Q4, with earnings per share forecasted to fall another 6% year over year.

However, the analyst consensus currently expects earnings-per-share growth to resume in Q1 2023 with an increase of 8% and continue to move higher from there. Analysts are calling for a record earnings year for the broad-market index.

That forecast arguably puts the stock market at risk of negative guidance revisions, but it also shows that analysts expect a rebound in corporate earnings after poor performance last year.

No one knows for certain if or when another bull market will start in 2023, but if inflation keeps falling toward 2%, the Fed stops hiking rates, and corporate profits continue to grow, it seems like a good bet that a new bull market will begin.