No. 1: Expanding its reach

Celgene is already the big kahuna in multiple myeloma treatment, but it’s expanding its product line beyond cancer, and that offers significant opportunities for sales and profit growth. 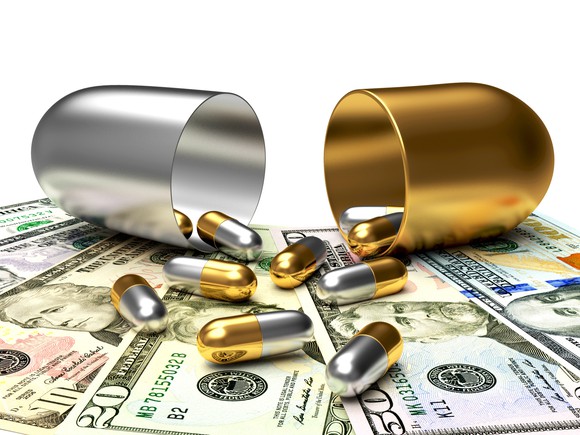 In order to diversify itself, Celgene successfully developed the psoriasis drug Otezla in 2014, and it acquired the clinical-stage multiple sclerosis drug developer Receptos in 2015.

Rapidly expanding demand for Otezla has already made it a blockbuster, with annualized sales of $1.2 billion exiting 2016, and projected sales this year of up to $1.7 billion. And, recently reported phase 3 data on ozanimod, which it acquired when it bought Receptos, could position it as the best MS drug in its class. Over the past few years, doctors are increasingly prescribing oral MS therapies, rather than injection-based drugs, and as a result, sales of oral MS drugs totaled over $8 billion in 2016. Celgene plans on filing for ozanimod’s approval soon, and a regulatory green light could come next year. If approved, I think ozanimod’s impressive safety profile will allow it to quickly become yet another blockbuster drug in Celgene’s portfolio.

Given that Celgene’s already got a slate of blockbuster drugs to its credit, and another potential winner is on the horizon, I think this company can be a cornerstone holding in growth investors’ portfolios.

No. 2: Turning the corner to profitability

Ionis Pharmaceuticals has been developing RNAi-based medicines for over a decade, and a recent drug launch could make this a pivotal year for the company.

In December, collaboration partner Biogen won an FDA go-ahead for Spinraza, a therapy to treat spinal muscular atrophy (SMA). SMA is a rare disease, but a lack of effective treatments has industry watchers predicting that sales could eventually turn this drug into a billion dollar blockbuster. Biogen has priced Spinraza at $750,000 for the first year of treatment and $375,000 annually after that, and mid-teens royalty payments to Ionis could make Ionis profitable in 2017, on a pro forma basis.

In March, Ionis Pharmaceuticals announced late-stage trial results for volanesorsen and a planned spin-off of this drug and three of its other cardiovascular disease therapies as a new company named Akcea. Ionis will retain an equity stake Akcea, and Akcea expects to file volanesorsen for FDA approval this year. If approved, it will become an important new option for the treatment of familial chylomicronemia syndrome, a rare and potentially life-threatening lipid disease affecting between 3,000 and 5,000 people worldwide. The decision to spin-off these drugs should reduce Ionis operating expenses by lowering its R&D expense, while still giving it a chance to profit from volanesorsen’s eventual commercialization if it’s approved.

GlaxoSmithKline  should report data on another one of Ionis Pharmaceuticals’ drugs soon too. The two companies are teamed up on Ionis-TTRRx, a drug for familial amyloid polyneuropathy (FAP), a disease that can cause nerve damage. There are an estimated 10,000 cases of FAP worldwide, and if the trial is a success, TTRRx could be filed for approval before the end of the year.

Overall, Spinraza sales and revenue from collaboration partners could allow Ionis Pharmaceuticals to transition into a profitable company this year, and potential revenue from volanesorsen and TTRRx could boost that profitability as early as 2018.

No. 3: Fast-approaching the finish line

Betrixaban is a factor Xa anticoagulant that, if approved, could get used in millions of elderly, acutely ill patients. Factor Xa anticoagulants launched by competitors are already displacing the use of prior generation therapies, but none of those drugs are approved for use in the same indication betrixaban targets. The FDA is reviewing betrixaban on an accelerated timeline, and if it gets an OK, then it could become a top-seller given that up to 24 million acute medically ill patients worldwide could be helped by it. The FDA’s decision is expected on June 24.

Secondly, management plans to refile for approval of its factor Xa reversal agent AndexXa in the second quarter, and if the FDA green lights it, then it will become the first FDA-approved antidote for factor Xa drugs available. Last year, the FDA rejected AndexXa because it wanted to see more information on manufacturing and on how it works with less-commonly prescribed factor Xa therapies. Assuming management gets the drug filed in Q2, AndexXa could win an FDA OK before the end of 2017, and if so, then Portola Pharmaceuticals estimates up to 150,000 patients per year could be treated with AndexXa.

Admittedly, regulators could balk at approving these drugs, and if that were to happen, this company’s shares would tumble. But the opportunity associated with betrixaban and AndexXa is big, and that makes this company a risky, but incredibly intriguing stock to buy.