“You want to buy when there’s blood in the streets…”

The saying is a standby for investors. But it’s tough to follow in practice. It means that the best opportunities appear when times are tough… and when no one else is interested in putting money to work.

That was the case in the second half of 2022. Investors have been darn scared – and for good reason. Last year was the worst year for stocks since 2008.

By now, though, the fear has gotten so widespread that a bottom is likely near. That’s what a specific sentiment reading is telling us, at least.

Mom-and-pop investors want nothing to do with stocks based on this measure. But that’s fantastic news for us – because similar setups have led to massive 25% gains a year later.

TD Ameritrade is one of the largest brokerages in the U.S. The company has more than 11 million individual accounts totaling $1 trillion-plus in assets.

The brokerage analyzes its clients’ accounts to create an index. Mom-and-pop investors make up a good chunk of those accounts… So by looking at what regular folks are doing with their money, TD Ameritrade has built a powerful sentiment gauge.

It’s called the Investor Movement Index (“IMX”). It includes data like account holdings, position changes, and trading activity. And each month, the index tells us if regular investors are bullish or bearish.

Like most sentiment indexes, though, this is a contrarian tool. When the IMX reading is low – and investors are scared – we want to consider buying. And that’s exactly where we are right now. Take a look… 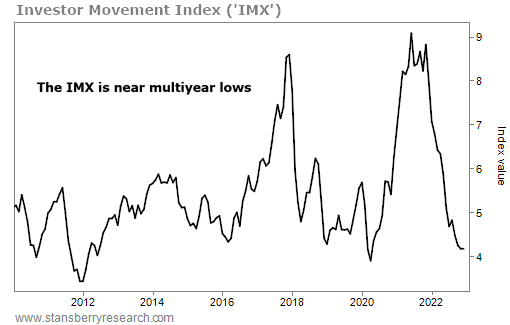 The IMX crashed throughout 2022. And it hit its lowest level of the year in November and December.

That was also one of the lowest readings since the index began in 2010. And in the past, similar lows have proven to be solid buying opportunities.

To see this, I looked at each time the IMX hit a new low at today’s level or lower. Here’s how stocks performed after those setups…

These are downright impressive numbers. Stocks have jumped 11% in a typical year since this index’s data began. But buying after setups like today’s crushes that return.

These cases led to gains of 13.7% in three months, 23.5% in six months, and 24.7% over the following year. That’s nearly five times better than the typical six-month gain and more than double the typical annual gain.

Make no mistake… We just finished one of the toughest years of our lifetimes. Mom-and-pop investors are scared as a result. And that’s a bullish sign for us as contrarians.

Simply put, we have good reason to expect a 2023 recovery in stocks. Don’t get caught on the sidelines and miss it.