If you’re looking for a stock to buy in the oil industry, a great place to start is with a company that can make money no matter what the current oil price is. The catch, of course, is there aren’t a lot of companies that fit that bill. That can make it hard to find a great place to invest, particularly when crude oil prices continue to swing around but don’t appear ready to push past $50 for the long term: 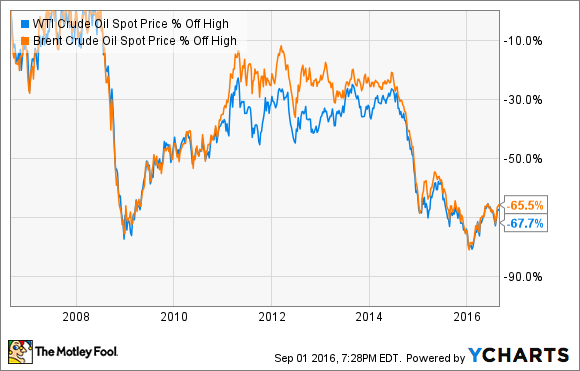 This is exactly what I like about Core Laboratories N.V. (NYSE:CLB), and it’s a key reason it deserves consideration as the best oil stock you can buy. Let’s take a closer look at what sets Core Lab apart and why it should be on your radar.

Core Lab’s expertise is reservoir optimization — providing analysis of the materials a reservoir is made of, chemical data about the fluids produced, and a variety of other critical information producers need to most cheaply and efficiently recover oil and natural gas. This data and analysis is important throughout a reservoir’s life cycle, and Core Lab is able to assist producers with both new production and improving costs and efficiency at existing reservoirs.

The draw from producers is twofold. When oil or gas sells for high prices, the more product a company can produce, the more it can sell at higher prices. Core Lab helps producers do exactly this. On the other end of the cycle, when prices are low, producers are more focused on lowering costs and improving efficient operations. Again, Core Lab comes in, providing the expertise to improve existing reservoir production.

There are very few oilfield service companies that can lay claim to still being in demand whether oil is cheap or expensive.

There are a lot of well-run companies in the oil industry that do a lot of different things. But generally speaking, they often have high operating expenses, which can make it much more difficult to navigate a cyclical downturn. Core Lab’s model is a much more “asset light,” based largely on its intellectual property and technical expertise instead of owning the “picks and shovels.” This means lower operating expense as a percentage of total revenue, and that really pays off when oil prices are low.

Here’s how Core Lab compares in this measure against a cross-section of other companies in the oil industry:

Comparing data in the table from 2015, when oil prices were at decade-plus lows, with 2013, when they were at historical highs, shows that Core Lab’s operating expenses were far lower as a portion of revenue than any of its “picks-and-shovels” peers in both periods. Furthermore, it’s worth noting that the companies listed are widely considered some of the best in the industry at what they do, with talented, capable leadership. It’s simply the differences in the operating models of various parts of the oil industry. 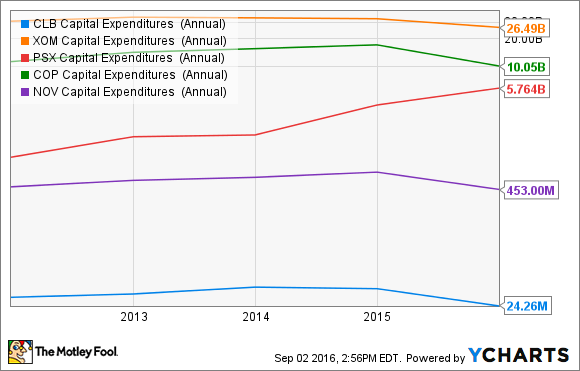 These raw numbers can be misleading, since Core Lab is much smaller in terms of revenue than its peers. But there’s an important message here: Companies such as ExxonMobil, ConocoPhillips, and Phillips 66 must regularly invest huge amounts of capital simply to maintain their current capacities and production levels, much less grow them.

This isn’t to say capital expenditures are bad — far from it. The risk with these investments in the oil industry is that projects can take years to complete before they start generating any return. That’s fine when oil and gas prices are high. But when the cycle turns negative, a project that was forecast to be profitable at $90 oil may lose money if it comes online in a prolonged downturn such as the current one.

Core Lab’s relatively unusual business model for the oil and gas sector, as well as the value of its services to oil producers no matter crude oil prices, make it a solid company that stays profitable through the industry’s ups and downs. Factor in top-notch leadership that has consistently used the company’s steady cash flows to buy back shares over the past decade and fund a dividend that’s on track to increase in coming years, and there’s a lot to like about Core Lab as an investment.

For investors looking for an oil stock to buy today, there’s a strong argument that Core Lab is the best oil stock you could buy now.