There’s a light at the end of the tunnel. The ugly days we’ve endured for much of the past year will soon be behind us…

The election will be over.

I can’t wait. This election has been more divisive than any in recent memory. There’s been plenty of name-calling and ugliness. Friendships have been lost. And we’ve seen a number of firsts (though not particularly good ones) in American politics.

But it won’t be long until it’s all over. Which means it’s time for investors to start thinking ahead to post-election returns.

Remember, we buy companies… not politics. Great companies succeed – and are great investments – regardless of who or which party is in office.

If a company is trading at a value compared to its peers, and it’s increasing income, earnings and revenue at double-digit paces… then who cares who’s in the White House?

The president has no influence over all that.

Today, I will outline some surprising broader trends in a post-election market. (It could be just the pick-me-up you need to get through these last few weeks of ugliness…)

The good news is that markets generally abhor uncertainty. When a new president is elected, that uncertainty subsides. It means we can get back to business as usual, focusing on all the other elements that threaten our investments.

Once that election anxiety is offloaded, the markets have a history of performing well.

For the S&P 500, the year (January 1 to December 31) following a U.S. presidential election is largely a profitable one. 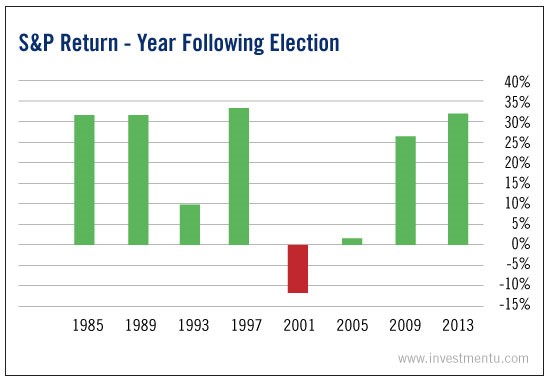 That’s a great-looking chart. Over the last eight elections, the S&P has ended the year down only once following an election. And that was in 2001 – as the dot-com bubble burst and we suffered the tragedies of Sept. 11.

Despite all those calls that the world would end if “So-and-So” was elected, the S&P has gained a monstrous 19.40% (on average) in the first year after the last eight elections. Not bad considering the average annual return over the last 30 years is closer to 10%.

The gains are also broad-based, expanding to technology stocks and small caps. The Nasdaq is averaging a 19.36% gain in the year after a U.S. presidential election. The Russell 2000 averages a gain of 20.20%.

Small caps and tech stocks are kings in the first year of a new president. The two have outperformed the S&P 500 in five out of the last six cycles, including the last four straight.

Now, I’ve been a big proponent of U.S. small cap stocks over the last several years. Generally, these companies see the majority of their revenues generated domestically. That means, unlike the S&P 500 – where half of all revenue comes from international markets – there’s little to no currency headwind.

The American consumer has proven to be one of the most resilient on the planet. So I’ve focused on this strategy, quite successfully.

But you also have to understand that for small caps, election years versus the first year of a new president are completely different beasts…

Yes, gains are good for the Russell 2000 in both. Break it down, though, and you’ll see inequality in terms of performance.

There isn’t a single election year that Russell Growth stocks outperformed Russell Value stocks. But there’s a tremendous about-face in the year following an election…

Going forward, both flavors of small caps should surge during the year ahead. But it won’t be lopsided. Small cap growth stocks should pick up speed. They’ve posted 34%-plus gains in the last two years following an election.

On top of that, the broader markets should let out a huge sigh of relief and launch into a strong rally.

Maybe your candidate will win the election. Maybe they’ll lose. But if history is our guide, neither outcome should have a negative impact on your investments. Especially if you focus on technology and small cap stocks.