Monday’s “Comey Hearings” on Capitol Hill were spectacular in their revelations of Russian collusion in the 2016 presidential election, but investors merely shrugged. Their main concern: tax reform.

As the markets move sideways amid today’s political uncertainty, we’ve found a little-known auto stock that should bolster your portfolio in 2017. First, let’s look at the eight-year-old bull market, which appears to be running low on gas.

The S&P 500 on Monday closed 0.2% lower while the Dow and the Nasdaq ended roughly flat. Meanwhile, the small- and mid-cap Russell 2000 underperformed with a decline of 0.5%.

Monday’s lackluster activity dovetailed with the range-bound action that we’ve seen over the last couple of weeks in the stock market. As political leaders in Washington, DC fight each other over Russian electoral meddling and Obamacare repeal, investors are waiting for President Trump’s promised tax reform. The longer politicos squabble over other issues, the longer it will take for Wall Street to get its promised tax cuts.

Meanwhile, investors are searching for a catalyst that justifies today’s high stock valuations. The disconnection between earnings growth and valuation is a red flag, but it doesn’t necessarily portend a bear-market crash.

Economic and job growth remain healthy (albeit modest), with consumer spending and the housing market in robust shape. Certain cyclical stocks that tend to do well during the spring and summer months are set to outperform. 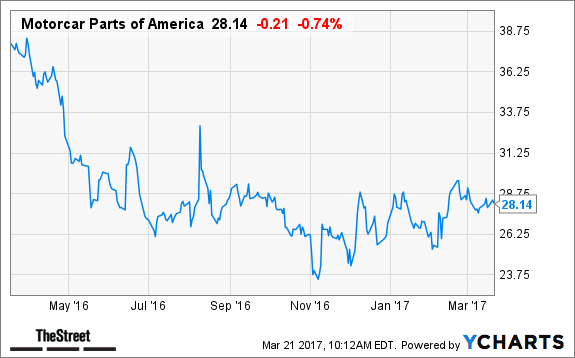 With a market cap of $529.97 million, the company is large enough to provide stability, but it’s small enough to offer the big double-digit gains that elude behemoths such as General Motors and Ford.

In the coming warm weather months, the housing rebound, falling unemployment, still easy consumer credit and a bullish stock market should prompt buyers to open their wallets in automobile showrooms.

The investment crowd is drawing the obvious conclusion from the auto sector’s tailwinds by focusing on improved prospects for the major automobile OEMs. But you’re missing the rest of the story if you ignore the makers of auto parts.

It’s not just new sales that boost this vital sub-sector of the auto industry. Auto parts makers such as MPAA also reap revenue from consumers who finally feel financially confident enough to tackle deferred maintenance on their aging cars.

The average analyst expectation is that MPAA will generate year-over-year earnings growth of 20% in the current quarter, 7.7% next quarter, 13.5% for the full year, 8.10% next year and 25% over the next five years on an annualized basis.

Despite these stellar growth prospects, the stock’s trailing 12-month price-to-earnings (P/E) ratio is only 18.3, less than the auto parts industry’s trailing P/E of 20.3.