Stocks have been on a roll recently. And we think the good times will keep rolling — but maybe not for the reason you think.

That’s a big rally. But believe it or not, we think it’s just getting started.

Truthfully, there are lot of reasons why stocks will soar over the next 12 months. Inflation will fall. The Fed, at some point over the next six months, will pivot dovish. Treasury yields will collapse. Stocks are oversold and undervalued. There’s a lot of cash waiting on the sidelines for the right moment to buy. The economy – despite all the critics – is on very solid footing.

We’ve got a whole laundry list of reasons why stocks will be significantly higher in 12 months.

But there’s one reason even we hadn’t thought of until recently that may be the most compelling as to why stocks will soar. It’s the midterm elections.

Need another reason to get bullish? This is it. A post-midterms stock market breakout is coming to Wall Street.

In the stock market, there may be nothing more bullish than a midterm election.

Seriously. There have been 20 midterm elections since World War II. Every time, stocks rallied over the following year.

But most years, the gains were huge. We’re talking 15%-plus, 20%-plus and 25%-plus rallies in under a year! On average, stocks rally nearly 15% in the year following a midterm election, with zero instances of a negative return.

We are now less than two months away from the 2022 midterm elections. Using history as a guide, it seems very likely that stocks will be about 15% higher by this time next year.

Actually, a deeper dive with the data implies that stocks will rally much more than 15% over the next year. That’s mostly because stocks have sold off into these midterms.

This isn’t a normal year for the stock market. The S&P is down 16% year-to-date. Therefore, it’s somewhat unfair to compare this year to previous midterm years when stocks were humming along. Change the circumstances, and you may change the outcome.

So, to be more accurate with our analysis, let’s focus on years where stocks struggled heading into a midterm election. By struggled, we mean the S&P 500 was down more than 10% year-to-date heading into elections.

Zooming in, we grew even more bullish on the prospects of a massive stock market breakout.

Typically, the bigger the selloff into the midterms, the bigger the rally. And the quantitative correlation averages out to nearly a perfect 1:1. Therefore, with stocks down 16% year-to-date, it seems fair to say that the market will rally 16%-plus over the next year. 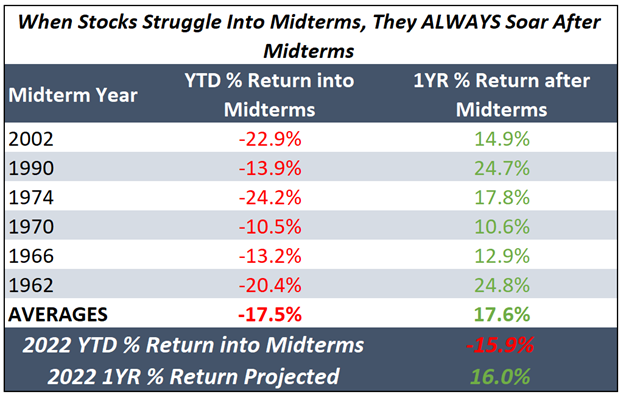 Of course, history is no perfect indicator of the future. But it is a good guide. And this guide of stocks always rallying after the midterms – and especially so after selling off – is very bullish.

The Final Word on an Election Season Breakout

Off the top of my head, I can name three 100% accurate technical indicators that are all suggesting stocks soar over the next year.

You have the 50% Fibonacci retracement (where stocks retook half their bear market losses in the summer rally, a phenomenon that only happens when bear markets end).

You have the 90% breadth indicator (where 90% of stocks burst above their 50-day moving averages in August, a phenomenon that always predicts big gains over the next year).

And, now, you have the midterms (where stocks always rally in the year after the election season).

We try not to look at the market with rose-colored glasses. We always try to analyze the data and listen to what it’s saying.

Right now, the data is screaming that stocks will rally in a major way over the next 12 months.