There are around 8,700 stocks listed on the U.S. market today.

But what if I told you that you need only five of them to build a lucrative retirement?

I’ve been telling you all about the power of a strategy known as trend following over the past several weeks. It’s the same strategy used by high-end hedge funds to generate investment gains for millionaires and billionaires in any market.

Now I want to show you how a trend following approach can let you stick with just five stocks to earn outsized profits with a fraction of the risk of buy and hold investing.

“One of the most beautiful things about using a trend following strategy is that it’s hands off,” explains our trend following maven Jonas Elmerraji. “Remember, the goal of this investment approach is simple: You want to identify big trends when they’re just getting started. So once you figure out what rules identify a trend, you can let the computer do the heavy lifting and tell you what to buy and sell.”

But that doesn’t mean that you need to crunch those numbers for all 8,700 U.S.-listed stocks. Just a handful will do fine.

The idea of buying just a few names is probably foreign to most modern investors. After all, we’ve all had the word “diversification” crammed into our brain for the past few decades.

To answer why, we have to think about what you’re actually buying when you buy stocks…

“There’s a reason why people lump ‘stocks’ into a big group,” Jonas continues. “It’s because, for the most part, all stocks trade the same. We can measure that by figuring out the implied correlation of a group of stocks like the S&P 500. Right now, the implied correlation of everyone’s favorite index sits at 52.24. That means that around 52% of stock moves are happening together.”

To get real diversification, we need to focus on buying things that have very low correlation with one another.

Even with low correlations, five seems like too few to protect us from getting hammered if one crashes. The truth is that owning five stocks has only around 6% more risk than owning 1,000 stocks does; ratchet your number of stocks to 10 and you’ve got only 3% more risk from being underdiversified.

You’re not exactly playing Russian roulette by owning just a handful of names.

As a trend following trader, you’re not trying to own a bunch of names to diversify your account. Instead, you’re focusing only on trends. So you may only own one or two of them at any one time. Your stop losses provide the risk protection that diversification doesn’t.

Here’s the trend following profit chart that I showed you before: 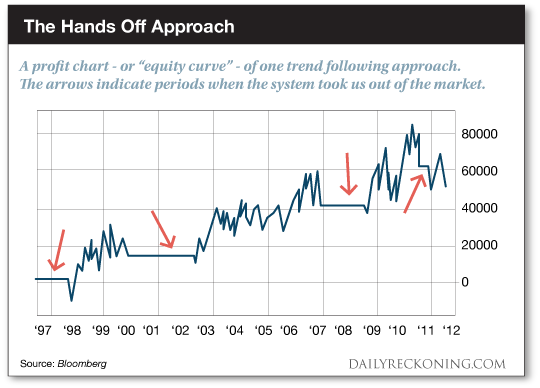 “In the system that I used as an example, there was only one investment: the SPDR S&P 500 ETF (NYSE:SPY). It’s a good proxy for “stocks” as a group,” Jonas says. “But look at the chart and you’ll notice something problematic about only using one stock for a trading system — there are a lot of times when the system says not to own that stock. I’ve drawn arrows at all the places where you’re simply out of the market under that approach.”

Adding other, low-correlated stocks to your radar means that you can increase your returns when the big indexes aren’t doing anything. One of the best ways to find low-correlation names is by turning to other asset classes.

Think about it: What if you’d owned gold during the first two flat spots and owned Treasuries during the last two? The system’s returns would have been much higher.

The best way to do that is by using exchange-traded funds.

ETFs are a way to get exposure to a whole asset class that’s as easy to buy or sell as any stock. While they do charge management fees (a percentage of your investment), those fees are lower than similar mutual funds typically are. They also have tax advantages.

What five ETFs might make up our investment universe?

As a starting point, Jonas has made us a list of five asset classes that offer low correlations and an opportunity to “fill in the flat spots” in our trend following profit chart:

This is a very simplified example of some ETFs that provide attractive exposure for a trend following strategy.

The important thing to remember is that the conventional wisdom about how many stocks you should own is bogus. Buying a bunch of stocks doesn’t give most investors the diversification that they think it does, and owning just a handful of names doesn’t ramp up risk as dramatically as so many folks think it does.

In fact, using just five investments in your portfolio can provide all the features you need to fund a lucrative retirement using a trend following strategy.