The stock market has a habit of punishing as many investors as possible.

This is what’s called the “pain trade.” It inflicts the greatest possible pain on the largest pile of investment dollars. Few are prepared for it… yet it’s the most likely outcome.

This is why contrarian investing works so well. It’s about finding what everyone else views as a sure thing… and taking the opposite bet. Even more, this investing style is especially effective when the crowd is acting as one.

Instead, it’s for stock prices to soar much higher.

Professional money managers aren’t prepared for that possibility. They’re betting less on stocks than at any other time over the past two decades. And as contrarians, that’s why we should expect a rally from here.

Sentiment has tanked alongside stock prices this year. It’s a vicious cycle. Investors sell because they’re fearful, which leads to falling prices – and more fear.

We can see this by looking at what professional money managers are doing with their money. Specifically, we’re looking at the Bank of America Global Fund Manager Survey.

This monthly survey asks hundreds of these “pros” how they’re investing, what worries them, and where they expect stocks and the economy to go next.

In total, these folks manage hundreds of billions of dollars. So their sentiment is an important gauge of where the market is headed.

Today, the pros are the most bearish they’ve been in decades. They own fewer stocks right now than at any other time since the data began in 2002. Take a look… 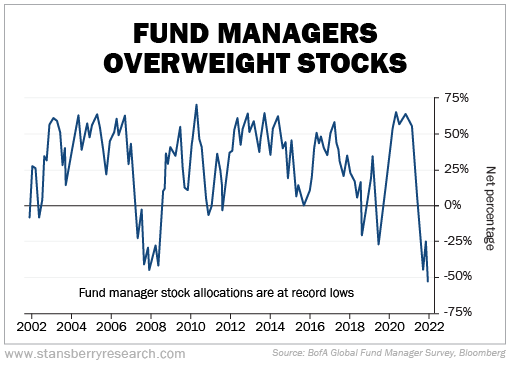 This month’s reading is negative 52%. Bank of America doesn’t break this number out more than that… But roughly speaking, that means about 25% of professional investors are betting on a stock boom while 75% are betting on a continued bust.

That spread is the widest on record… even worse than what we saw during the 2008 financial crisis. Importantly, this was a contrarian indicator then, too…

Back then, the crazy readings lasted for a while. They also began long before stocks bottomed. So while they didn’t “call the bottom,” they still signaled an incredible buying opportunity was on the way.

We’ve seen the same thing throughout the last decade. The measure only went negative a handful of times: most notably, the European debt crisis in 2010… the S&P downgrade of U.S. credit in 2011… the near bear market in 2018… and the months leading into the pandemic.

In each case, investment pros expected the worst. And the market inflicted the most pain it could… sending stocks dramatically higher.

This recent data doesn’t tell us that the bottom is here today. But it does mean that if you have a long-term investment horizon, now is a good time to buy stocks.