The energy industry is one of the few places in today’s market where you can find stocks selling at cheap prices. I’m not just talking about oil & gas stocks, but almost every aspect of the broader energy industry is suffering for one reason or another. The beauty of this situation is that energy is a notoriously cyclical business, and it’s times like this where investors can make a lot of money buying stocks now and waiting until the market turns.

If you’re buying cheap energy stocks today in anticipation of a big payout several years down the road, there are two stocks you should consider today: solar panel manufacturer First Solar(NASDAQ:FSLR) and drilling rig owner Helmerich & Payne (NYSE:HP). Here’s a rundown as to why these stocks are so cheap today, and why they are some of the best portfolio candidates. 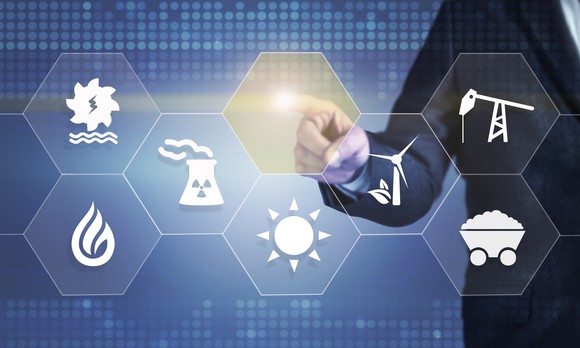 Solar may be on the rise again, but it’s still cheap

First Solar and the broader solar industry has had a pretty decent three-month run. Its stock is up 33% after the company raised its guidance when it reported better than expected results in the first quarter. Seeing a stock run up like that is enough to make any value-oriented investor a little nervous. But if you back out the lens a little further and even consider the current valuation, the company still looks quite cheap.

Even after this most recent stock price bump, shares of First Solar are still down more than 42% over the past 18 months. Much of that was the result of some legislative timing. Several renewable tax credits were set to expire at the end of 2015, and so developers scheduled to have most projects done by the end of that year to take advantage of those credits. Those tax credits were eventually extended for several years, but developer schedules were set in stone and demand for projects and panels declined quite a bit in 2016. This led to a steep drop in panel prices that the industry is still working through today.

That’s the nature of the solar business, though. It’s cyclical. There have been multiple periods of slowing demand and/or too much supply that have hampered profits for panel makers. Today is one of those low points, which makes for a great time to buy cyclical stocks in general.

So we have a stock that is trading at a low valuation at the bottom of the market cycle. That’s great, but there is also the fact that First Solar is arguably the best run solar panel producer from a shareholder perspective. The company has consistently outperformed its peers when it comes to returns on invested capital and returns on equity. 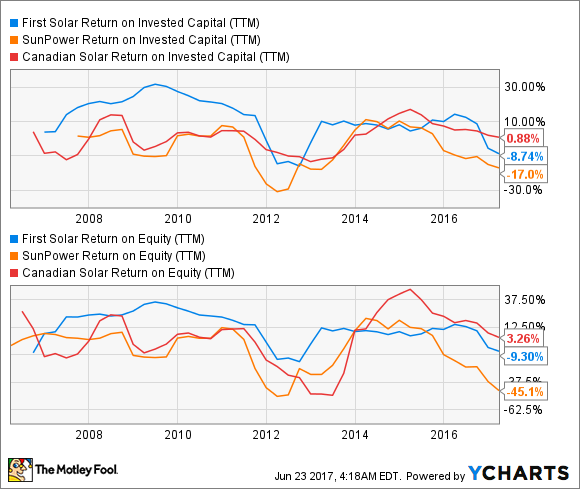 Moreover, the company’s net cash position — cash minus debt — is $2.1 billion, which gives it lots of options for growing the business. You could even argue that the stock is an even better deal than what the valuation metrics suggest since its cash position represents 61% of its current stock price.

All of these signs point to First Solar being an incredibly cheap stock that is going to be hard to ignore.

What’s wrong with a plateau at these rates?

If you were to simply look at the growth in oil production in the U.S. over the past year or so, one would assume that any company with a stake in the shale drilling game would be making money hand over fist. That hasn’t really been the case, though, and it has kept the share price of Helmerich & Payne at a level almost any investor can see as cheap.

Probably the most important factor influencing the stock price of Helmerich & Payne and other land rig stocks is the structural change in the way we drill shale wells. Exploration & production companies have simply become better at drilling these wells, and the number of rigs needed to grow production is significantly lower than before the most recent price crash. This means there are lots of idle drilling rigs that have the double effect of giving producers lots of pricing power when negotiating a contract and higher sunk costs related to maintenance for idle rigs. Helmerich & Payne hasn’t been immune to these effects, but it has so far managed to eke out modest operating profits throughout the downturn. 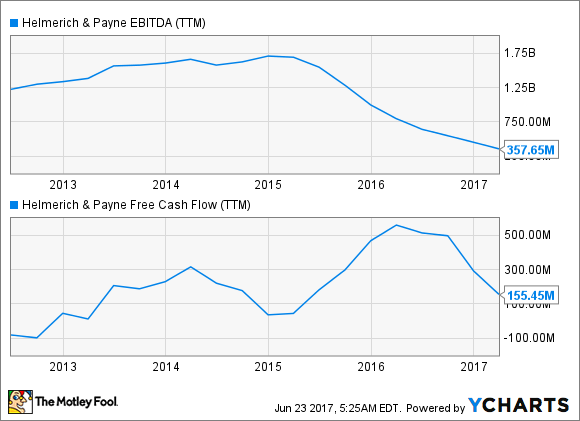 There are some concerns today that we are about to see a rapid deceleration in the rate of rigs going into the field. Oil prices are coming down again, and many producers have put their 2017 capital budgets in place. That may very well be the case, but one thing that assumption overlooks is the kind of rigs that will get deployed in the future, and H&P’s ability to capture greater market share.

The name of the game in the shale patch today is high specification rigs that have the horsepower to drill horizontally for 10,000-12,000 feet and drill multiple wells on a single pad rapidly using either a walking or skidding system such that a rig doesn’t need to be disassembled and reassembled for each well. Today, H&P has more rigs with these specs — or can be easily upgraded thanks to its standardized rig design — than the rest of its competitors combined. This suggests that the company has a much better chance at receiving any additional drilling work that will be available in the next six to 12 months. 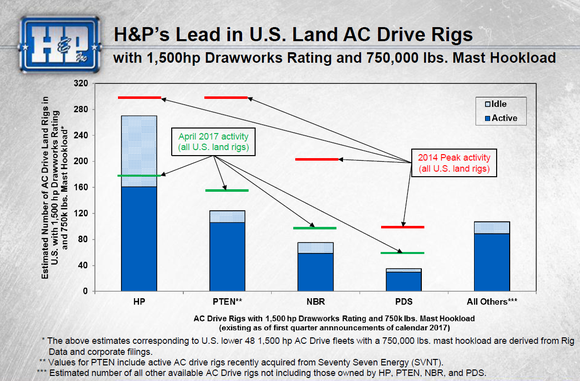 Like I mentioned earlier, most valuation metrics for cyclical stocks can be deceiving based on where in the industry cycle that stock is. In the case of Helmerich & Payne, its trailing twelve-month results have been weak, so its earnings based valuations — enterprise value to EBITDA, price to earnings — look high. On a price to tangible book value basis — a valuation metric that looks at the underlying assets that generate earnings versus the earnings themselves — though, shares look cheap. At 1.3 times tangible book, H&P’s stock is close to its lowest valuation in over the past 10 years. Also, shares have a dividend yield of 5.4%.