Happy days are here again for biotech stocks. The industry-tracking iShares Nasdaq Biotechnology Index has risen further than the broad market in 2017, and a handful of companies that suffered in 2016 have bounced back. 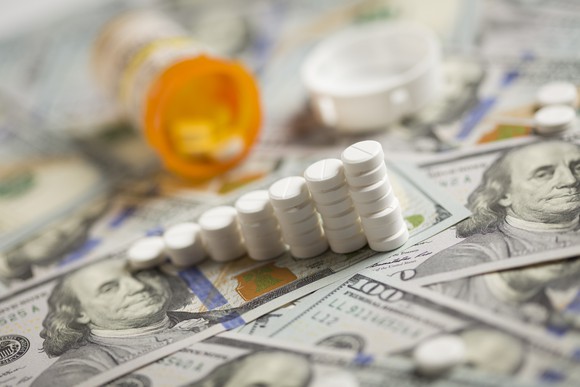 Regeneron Pharmaceuticals suffered a market thrashing at the beginning of 2016, but the stock has gained about 24.6% this year. First-quarter earnings showed stronger-than-expected growth for Eylea, a pricey treatment for eyesight-robbing conditions that generates roughly two-thirds of the company’s total revenue. In the first quarter, global Eylea sales posted a 12% gain over the previous-year period, which puts the drug on pace to reach an outstanding $5.4 billion this year.

Eylea’s continued success isn’t the only thing pushing up this stock. The biotech recently launched one of the most anticipated drugs of 2017. Dupixent earned an FDA approval for treatment of eczema at the end of March and is expected to generate annual sales of around $5 billion at its peak for Regeneron and its partner, Sanofi.

Although Regeneron still looks like a buy despite its recent bounce, there could be trouble ahead. There is a tremendous unmet need for better eczema treatments, but Dupixent will compete with Pfizer‘s recently launched Eucrisa in the space. Plus, the most litigious biotech in the industry, Amgen, has Regeneron firmly in its crosshairs with patent infringement suits concerning Dupixent, and another potential blockbuster drug in its lineup. 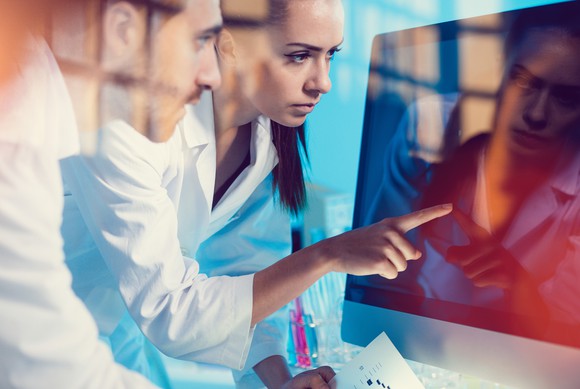 Geron Corporations’s lead candidate, imetelstat, is in the middle of a complex trial for the treatment of myelofibrosis and related blood disorders. There was deep concern the program could end up on the scrap heap. Patients with this rare bone-marrow disorder failed to exhibit a significant reduction of associated symptoms when treated with a 4.7 mg/kg dose of the candidate

The stock roared back in April, however, after Geron announced that the 9.4 mg/kg dose looked effective enough to ask the FDA for a meeting to design the second half of the study in a way that could support a new drug application. If the talks go well, Geron and its partner, Johnson & Johnson, could begin the registrational part of the imetelstat trial in the fourth quarter of the year.

Geron’s shares have surged 46.4% higher already this year, but continued success for imetelstat could swell its recent $482.3 market cap much further. Johnson & Johnson has a solid track record when it comes to sniffing out successful drugs while they’re still in clinical-stage development. If eventually approved, imetelstat could generate more than $400 million in peak annual sales.

Before you bet the house on Geron, though, you should know that imetelstat is the only drug the biotech has in clinical trials right now. If Johnson & Johnson ends up backing away from the program, it would lead to heavy losses.

Geron isn’t the only company with a drug Johnson & Johnson would like to see succeed. Portola Pharmaceuticals has an exciting new drug candidate that reverses the effects of the healthcare giant’s next-generation blood thinner, Xarelto, a drug that generated $2.3 billion in sales last year.

Easy, oral administration has made Xarelto, and other factor Xa inhibitors, popular alternatives to age-old warfarin, and the availability of a fast-acting reversal agent would boost their use even further. Sometimes Xa inhibitors are too effective and cause dangerous bleeding events, but the administration of Portola’s AndexXa quickly neutralizes its effects.

Last year, the FDA sent Andexxa’s new drug application back for more info regarding its manufacturing site, not the drug itself. Although Andexxa has been delayed, the agency is widely expected to give the thumbs-up eventually. The company also has a factor Xa inhibitor of its own under FDA review, with a decision expected in June. If approved, betrixaban might not surpass the entrenched competition, but $1 billion or more in annual sales isn’t a far-fetched notion.

Portola’s stock price has risen about 73% so far this year, but the company’s recent $2.2 billion market cap could more than double over the long run if either betrixaban or Andexxa succeed. Impressive data suggests a solid chance of success, but another regulatory snafu could pop this ballooning biotech.