The “Internet of Things,” a vast network of devices like phones, watches, clothing, and even toothbrushes – all communicating, all collecting and returning data – has been one of the biggest tech stories of the past five years.

But I’m here to tell you, it’s about to get even bigger, even more profitable, by an order of magnitude. That’s because the Internet of Things is about to crack open healthcare at the most fundamental level, with small networked medical, prosthetic, and therapeutic devices set to explode onto the market.

I’m talking about “wearapeutics.” It’s going to be a game changer.

But the game can’t change without this critical sector that’s very much in play right now.

I’m going to show you just how big this market is going to get, and the one investment you need to hold long term to get the most potential profits out of this exciting development…

There Are Trillions in Untapped Potential on the Table

According to McKinsey Global Institute, the Internet of Things-based consumer market alone is likely worth $1 trillion. Factor in the healthcare and medical side, and you’re talking another $2 trillion – and all this before taking into account the potential movement into other industries, like energy, transportation, and agriculture – just to name a few.

But it’s the move into healthcare that’s the most exciting.

You see, right now, digital healthcare and wearapeutics is a “small” market, worth about $5.7 billion in 2015, according to IoT marketing research firm Parks Associates. 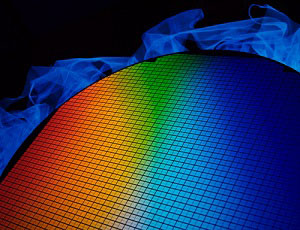 But… a decade from now, this segment alone is expected to be worth $97 billion. That’s a compound annual growth rate (CAGR) of 33%, which is to say 33% growth every year for 10 years.

This is a conservative estimate, too, so any way you slice it there’s a huge opportunity up for grabs here.

But profiting from this isn’t as straightforward as picking a stock in the company with one cool new sensor, or the best real-time glucose monitoring software. To get the maximum profit from this trend, investors need to “go big” and own something fundamentally important to all this growth.

In other words, the best play on this trend is to buy the infrastructure on top of which the wearable therapeutics market will be built.

This is what I mean…

To Profit, Stake Your Spot in the Semiconductor Sector

The shares I’m going to show you represent a ground-floor opportunity to participate in the next leg upward for semiconductor makers: wearapeutics.

This fund is already packing serious performance. In the past year, it has risen 21% in an extremely soft market.

It really embodies all the innovation underway in wearapeutics and the wider IoT field, so there’s plenty of diversity here.

There are small, very specialized semiconductor makers, and there are very big ones; some are major mobile players and others are taking real-world information (location, activity, weather conditions, heart rate) and creating a digital record in real time.

But large or small, semiconductors are the single best way to play this emerging “wearapeutics” trend, and the best way to do that is, hands-down, the exchange-traded fund (ETF) iShares S&P NA Technology Semiconductor Index Fund(Nasdaq: SOXX). Most people simply refer to the ETF as SOXX.

SOXX tracks the U.S.-traded semiconductor stocks in the PHLX Semiconductor Sector Index. This gives it broad exposure to some of the biggest semiconductor manufacturers in the world. That’s critical, because semiconductors are essential for getting wearapeutics, and indeed the wider Internet of Things, to its fullest potential.

SOXX gives you access to them all – 30 of the best semiconductor firms in the world. Just check out a few of the names in this basket of companies…

Any One of These Companies Is a Must-Own, but You Can Have Them All

Naturally SOXX exposes you to the biggest semiconductor players, like Intel Corp. (Nasdaq: INTC) and Qualcomm Inc. (Nasdaq: QCOM), as well as one of my personal faves, Nvidia Corp. (Nasdaq: NVDA).

I won’t list all 30 firms here, but to give you a good idea of the scope of the opportunity here, I’ll run down four of the most dynamic, profitable companies this fund holds.

First up is Texas Instruments Inc. (Nasdaq: TXN), the “granddaddy” of semiconductor stocks and the biggest holding in SOXX. It started out as an oil and gas company in the 1930s, but with the onset of World War II in the 1940s, Texas Instruments broke into the aerospace business – avionics for American warplanes, specifically.

Texas Instruments grew in part because it kept pace with how digital technology was advancing, such that by 1958, the the company’s R&D lab produced the world’s first integrated circuit – the foundation of semiconductors.

Nowadays, TI is the leading producer of analog and digital chips, the chips that convert “analog” information (human activity) into a digital format. Of its $13 billion business, $8.3 billion of its revenue is from analog chips. In the “wearapeutics” space, this capability is essential for accomplishing things like monitoring vital signs or even neuromotor signals in the human body and translating that to meaningful (for devices) digital information.

One thing I love about Texas Instruments is the fact that this company is stillplowing a whopping 10% of its revenue back into R&D, an impressive feat. 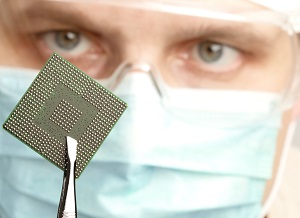 One the other end of the scale is ON Semiconductor Corp. (Nasdaq: ON), which is more than 10 times smaller by market cap than its “SOXX-mate” Texas Instruments.

But make no mistake, this company punches far above its weight.

ON started as a spin-off from late, great tech giant Motorola. And then it started buying companies, at least one acquisition a year since 2006.

Now it is a leading name in automotive, wireless, industrial IoT, power conversion, and motor control. These are some of the biggest growth sectors moving forward. Smart cars and smart manufacturing alone are demanding ever-increasing complexity, and the advent of wearapeutics and other wearable tech is only going to intensify that demand. I’d count on ON to deliver in spades.

In the past six months the shares are up more than 40%, which is a pretty big clue as to what the “smart money” sees in this innovator. Margins continue to expand and it has plenty of headroom from here.

It’s pretty clear, given its name, what Analog Devices Inc. (Nasdaq: ADI) specializes in. It makes sensors, algorithms, and software that converts non-digital information to digital, which can then be shared across networks and devices.

Analog is major player in the small-cell communications space, which the company sees growing handsomely in the next few years. Small-cell pushes signals from low-power transmitters, so that signals strength can be good over a range of 30 feet out to just over a mile. In a sphere where many different devices in the same house are going to be communicating, this is huge.

Qorvo Inc. (Nasdaq: QRVO), the “new” company arising from the merger of RF Micro Devices and TriQuint Semiconductor, rounds out the aces up SOXX’s sleeve.

Its niche is radio frequency (RF) devices for mobile, military, and original equipment manufacturers (OEM), making it a top player in this important segment.

Defense contracts in particular are good to see because (usually) the company has to manufacture robust products. Those products, once adopted and “proved out” by the military, go on to become highly valuable technologies for the business to business (B2B) and consumer markets. Defense contracts usually mean a good, solid revenue stream, as well.

RF is gaining more attention from OEMs as mobile devices are becoming more data-driven. As we head from 4G to 5G LTE signals, RF plays an increasingly vital role.

Qorvo is also an enthusiastic player in the small-cell market as well. A small company, strategically placed for monster growth, is hard to beat.

Right now, at the dawn of wearapeutics and digital healthcare, any of these companies on their own would be a smart bet. But as this growth reaches its fullest potential, owning all of the biggest players is a move your grandchildren will thank you for.

More from Michael: This New Tech Could Generate $2.86 Trillion in Wealth

The revenue growth is shocking. Last year, with a very limited release, it generated $70 million in revenue. This year, it’s on track for $684 million. But over the next three years, the core technology could create $2.86 trillion in new American wealth. And this isn’t just for the billionaires of the world. Many everyday Americans could become millionaires as well. Click here to see how you could be one of them.