Summer is on the horizon… and we could be in store for another record-breaking year.

Not for just the markets or the temperatures… but for the box office.

I know, when I’ve talked about the summer box office in the past, the crowd groans… “Not another superhero movie!” is the common lament.

As an investor, you don’t need to actually watch the movies. And your best bet might come from a tertiary play rather than the movie studios or theater operators.

I have one particular company in mind, which really puts the emphasis on “play.”

Before we get to the name, let’s set the scene.

I’m starting to wonder if “summer blockbuster season” even applies anymore. If it does, it now begins much earlier than before.

In March, we had Logan, Kong: Skull Island, Power Rangers, Ghost in the Shell and Beauty and the Beast.

These are not only beloved franchise movies, but also moneymakers. In the first quarter, North American box office ticket sales increased 7.2% vs. Q1 2016 to $2.402 billion. It’s also worth noting that 150 movies were released in the first quarter… Almost equal to the entire 1980 theatrical release total.

(Side note: If you feel like there’s a new “blockbuster” at the box office each week… that’s 100% true.

There are more movies being released each year than ever before. A lot more.

You’d have to go all the way back to The Passion of the Christ in 2004 to find a movie that represented more of the industry’s first quarter take.

Worldwide, the movie has brought in more than $1.1 billion. That’s huge for Disney, since the movie cost just $160 million to make.

But Beauty and the Beast is just the start of what’s shaping up to be a massive 2017 for Disney, which sits on a copyright gold mine (that it bought dirt cheap). It owns Marvel Studios, Pixar, Lucasfilm, plus, its own massive catalogue of hits.

The 14 movies of Marvel Cinematic Universe are now the top-grossing franchise of all-time at $4.23 billion. That tally is going to only rise with the upcoming releases:

Through Lucasfilm, Disney owns the Star Wars franchise, the second-highest-grossing franchise of all time. The nine movies so far have brought in $3.386 billion. And Disney has been scoring at least $1 billion at the box office with each release since it took over.

We already saw its one-off release, Rogue One: A Star Wars Story in December, which brought in $1.06 billion at the box off. The next sequel, Star Wars: Episode VIII will be released later this year – in the Star Wars’ perennial week-before-Christmas slot.

In addition, Disney will release the third installment in the Pixar Cars series in June. And Johnny Depp returns once again in Pirates of the Caribbean: Dead Men Tell No Tales in theaters Memorial Day weekend.

A Tale of Two Toymakers

Disney is in a great position as a studio… If only it could figure out what to do with ESPN, Disney might one day make a really great stock.

Until then, my favorite proxy for Disney and its plethora of moneymaking movie releases is Hasbro (Nasdaq: HAS).

Hasbro is considered the No. 2 toymaker in the world. But not only is that changing, I don’t think it could be further from the truth. Hasbro and Disney have several partnerships, including Marvel and the Disney Princess line – which it took from its competitor at the beginning of 2016.

And so far this year, Hasbro and rival Mattel (Nasdaq: MAT) are on two completely different paths… 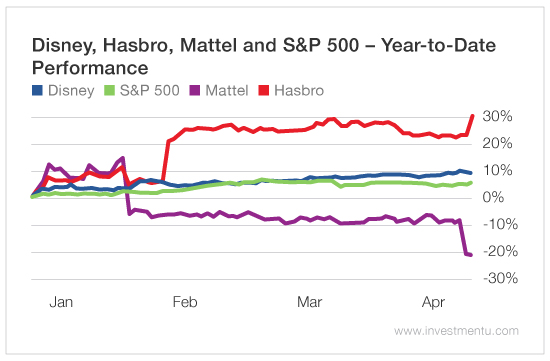 In the first quarter, Hasbro posted $849.7 million in revenue. This was not only an unexpected increase that caught Wall Street off guard… It had its own major ramifications.

This marked the first time since 2000 that Hasbro has reported quarterly revenue higher than that of Mattel.

So shares of Hasbro are hitting new highs and are up 30.6% this year, while Mattel’s shares are down 21%, trading at 52-week lows.

This is the power of that partnership with Disney. Better than that, Hasbro isn’t married to one studio. So, yes, it expects to see a big surge with the next Guardians of the Galaxy movie. But it’ll also score big from the upcoming Transformers: The Last Knight, one of the few summer blockbusters not owned by Disney.

In 2015 and 2016, box office sales set new records. And last year’s $11.377 billion looks like it will be unseated this year. Shares of Disney and other studios have done OK over the past year. But Hasbro has outpaced them all… and looks poised to have another blockbuster year.