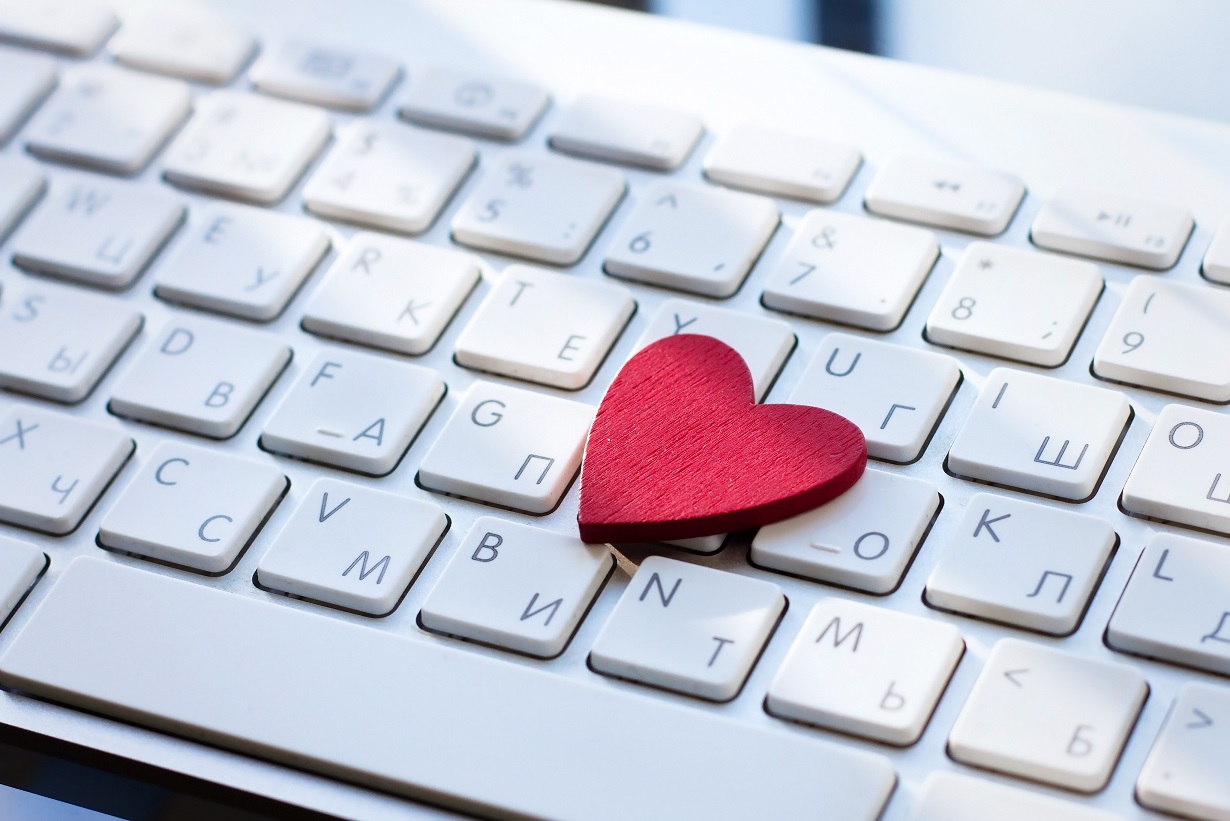 No one wants to be alone on Valentine’s Day. That’s a fact you should embrace as an investor.

The problem for a lot of people is that it’s hard to find that special someone, especially during the final stretch of the year. The winter holidays are focused on family and friends – i.e., people you already know. There aren’t a lot of opportunities to meet new people.

More than half of all single people make New Year’s resolutions aimed at being more social and focus on finding their soulmates in the year ahead.

In the olden days, that meant trolling bars or getting set up by a friend. Or maybe you were adventurous and thumbed through the classifieds. Or perhaps you joined a video or telephone dating service.

But those days are over.

Especially this time of the year…

Off to the Races

Online dating sites start the year off with a bang. The first Sunday after New Year’s Day is the busiest day of the year for new sign-ups.

It’s a common theme across the online dating world.

The site How About We will see membership increase 40% between January and February. ChristianMingle.com generally sees new sign-ups increase 41% between Christmas and Valentine’s Day. Profile views increase 25%, and the number of messages between members increases 26%.

Clearly, those new members are eager to get started.

There used to be a stigma surrounding online dating. But over the past decade, attitudes have changed. Nearly half of all Americans know someone who uses dating sites or has met a partner or spouse through one.

And before you go thinking online dating is a young person’s game, let me tell you… it’s not. At least, not completely.

From 2013 to 2015, the percentage of adults 55 to 64 years old using online dating sites doubled. There are even sites dedicated to this bracket, like OurTime.

That said, the fastest-growing demographic is 18- to 24-year-olds. The percentage that uses online dating sites tripled between 2013 and 2015. It makes sense. After all, they grew up living in the digital world.

And the percentage of Americans over the age of 25 who’ve never been married has been steadily increasing. In 1960, this number stood at 9%. By 2012, it increased to 20%.

These social changes are a continued boon for online dating and meet-up sites.

Love and Friendship Crush the Market

In the digital age, we have a wide variety of mobile apps and sites to meet new people. These range from casual to intimate, depending on what an individual is looking for.

We can look at three companies in this arena: The Match Group, MeetMe (Nasdaq: MEET) and Momo (Nasdaq: MOMO).

Match Group is by far the largest of the three, operating a considerable portfolio of 45 dating sites and mobile apps, from Match.com and Tinder to OkCupid and OurTime.

MeetMe offers two mobile apps, MeetMe and Skout. Both are more toward the casual end of the spectrum. The same is true for Momo, which is based out of China.

Over the past year, shares of all three have done exceptionally well… 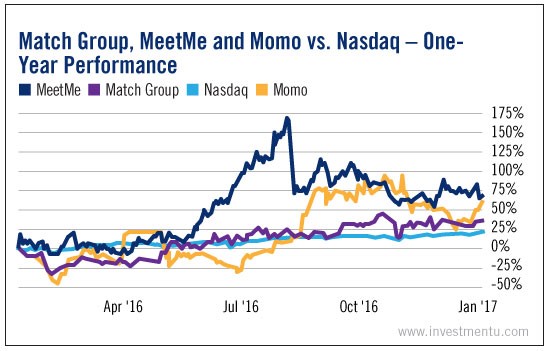 And the reasons are fundamental…

The company also recently released preliminary fourth quarter results. Revenue is expected to top previous guidance and increase 46% year over year. Plus, mobile advertising rates for the company increased to record levels, which is where 55% of its revenue comes from.

In the upcoming first quarter, MeetMe’s revenue is expected to increase 57% year over year.

For Momo, the growth is even stronger. Revenue for the year is expected to be up more than 271%.

Of course, the behemoth here is Match. Basically, if an individual isn’t using MeetMe, Skout or Momo, chances are they’re using a Match app or site. Revenue for the company is expected to be up 20% for the year at $1.22 billion.

New Year’s and Valentine’s Day ensure dating and social meet-up companies kick off the year with a flurry of activity. But unlike many of the trends I cover, this is one where the growth should continue throughout the year.

In other words, it may be time to put a little love into your portfolio.