Some of the best-performing biopharma stocks in recent years belong to companies developing cancer drugs, and it looks as if this trend is going to continue throughout 2017 and into the foreseeable future. Estimated global spending for oncology medicines is expected to grow from $107 billion in 2015 to $150 billion by 2020 as life spans lengthen across the developed world.

There are hundreds of biotech start-ups attempting to develop the next breakthrough therapy, but investors can avoid a great deal of risk by focusing on companies with winning track records and clear paths to continued growth. For example, Celgene Corporation (NASDAQ:CELG) is using massive cash flows from a successful blood cancer pill to invest in a cornucopia of tomorrow’s potential blockbusters. Meanwhile, Bristol-Myers Squibb Co.(NYSE:BMY) and Pfizer Inc. (NYSE:PFE) boast exciting new drugs that help the immune system attack tumors, and they pay regular dividends. 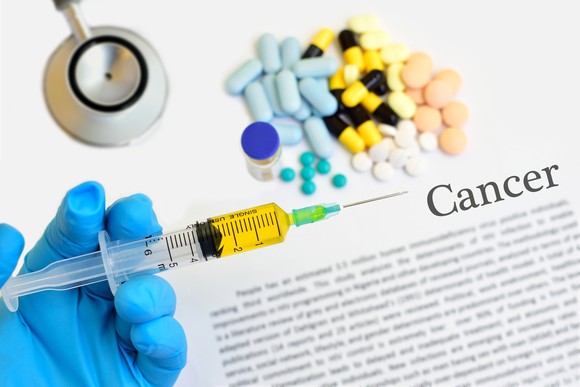 FROM INJECTABLES TO PILLS, CANCER DRUG SALES ARE ON THE RISE. IMAGE SOURCE: GETTY IMAGES.

There’s no one-size-fits-all method for biopharma investing. Read on, though, and I think you’ll agree these are three of the best cancer drug stocks that you can buy in 2017.

Expert expansion of its blood-cancer pill, Revlimid, made this one of biotech’s fastest growing companies in recent years. Since earning its first FDA approval in 2005, the company has increased the drug’s patient population from multiple myeloma to other blood-based disorders. Despite over a decade on pharmacy shelves, 2016 sales of Revlimid jumped another 20% over the previous year to $6.97 billion.

Celgene also makes extensive use of collaboration agreements that currently involve over a dozen separate companies developing new drug candidates for treating cancer and other diseases. This allows it to remain focused on the development of its own assets and remain poised to benefit from new and exciting trends in oncology research.

While it’s impossible to predict just how many of its collaborative efforts will pay off in the future, at Celgene stock is a great buy right now. Some blazing fast growth of recently launched drugs are expected to lift the bottom line at a 22.3% annual rate over the next five years, but a recent price of about 17 times this year’s earnings estimates is what you’d expect for a company growing less than half as fast. 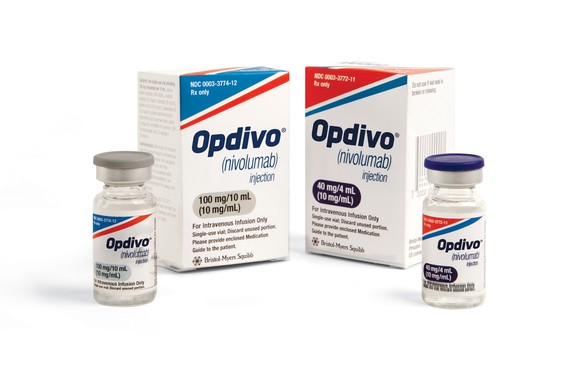 The market’s overreaction to a recent misstep makes this another great stock to buy at recent prices. Since earning its first approval in 2014, Opdivo has quickly become a popular treatment for several types of cancer.

The breakthrough therapy stops tumor cells from shutting down the immune system once it attacks, and the CheckMate 26 study pitted it against standard chemotherapies among newly diagnosed lung cancer patients. Becoming the first chemo-free treatment option for lung cancer would have made Opdivo’s successful commercial launch legendary, but it failed to outperform the current standards of care.

Bristol’s stock has been feeling the pressure since announcing the CheckMate trial results, and the overblown pessimism makes this a great cancer stock to buy now. Lung cancer is notoriously difficult to treat, and Opdivo’s position as a second-line therapy remains strong. Plus, it’s also gaining ground in head and neck, kidney, lymphoma, bladder, and skin cancer indications. Since earning its first approval in 2014, the immunotherapy racked up a stunning $3.77 billion in sales last year and should continue to climb.

Unlike Celgene, Bristol-Myers Squibb stock offers a nice 2.8% yield at recent prices. At recent prices, the shares can be scooped up for just 20 times this year’s earnings estimates. With earnings expected to grow at about 14.5% each year for the next five years, this cancer stock may be one of the best bargains of the year.

One large acquisition after another made America’s largest pharmaceutical company a sprawling behemoth that earned less per share in 2016 than it did in 2004. Although Pfizer’s past is dotted with expensive missteps, it has quickly risen up the ranks to become a top cancer drug stock to buy this year.

An immunotherapy developed in partnership with Merck KGaA is the latest rung on Pfizer’s ladder to become an oncology powerhouse. Named Bavencio, it operates along the same lines as Opdivo and recently earned FDA approval for the treatment of Merkel cell carcinoma.

The aggressive type of skin cancer is named after the cell associated with the disease, and it will probably be the first in a string of indications Bavencio earns approval to treat. The FDA is currently reviewing its application for bladder cancer, and late-stage clinical trials that could support head and neck, lung, stomach, ovarian, and kidney cancer applications are in full swing. 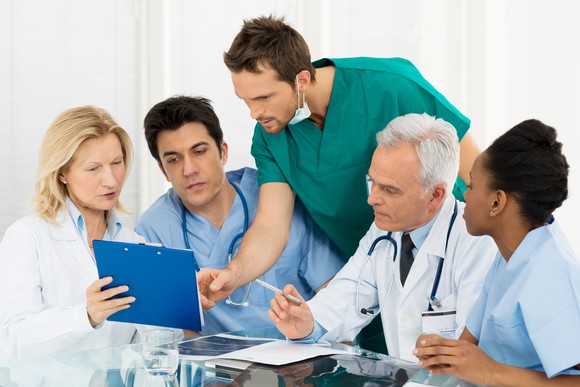 While Pfizer’s world-class sales force helps Bavencio reach its full potential, investors will also want to keep their eyes on the development of talazoparib. This highly anticipated candidate works in the same manner as commercial-stage drugs from AstraZeneca and Clovis Oncology, with peak annual sales expectations of around $1.5 billion or higher

Pfizer paid about $14 billion to acquire talazoparib and other drugs from Medivation, but it might be worthwhile in the end. Early clinical trial data for talazoparib suggests it could be as effective as its cousins and far easier for patients to tolerate.

A late-stage study currently under way should tell us more about talazoparib’s potential as a treatment for a difficult-to-treat population of breast cancer patients, and planned studies could also support applications for expansion to much larger groups of lung cancer and ovarian cancer patients.

While investors wait for signs of success from Bavencio and talazoparib, they can watch sales of Ibrance continue rocketing upward. Approved in 2015 for a specific group of breast-cancer patients, the capsules surged to $2.14 billion in sales last year, and a 15% gain from the third quarter to the fourth suggest they have plenty more room to run.

Unlike Celgene and Bristol, Pfizer’s focus on oncology is still relatively young. It certainly has a great deal of potential, and income-seeking investors will appreciate the stock’s 3.8% yield while it matures.

Consensus annual earnings growth expectations of about 6.4% over the next five years make Pfizer the slowest grower among the three. However, the diverse product lineup weighing it down could also make it less prone to erratic price swings down the road. At a recent price of just 13.3 times this year’s earnings estimates, it looks like a solid bargain for more conservative investors.