Believe it or not, the Federal Reserve wants the stock market to drop.

Usually, Fed officials don’t comment on the stock market. They’re supposed to be steering the broad economy, not stock prices. If asked about the market, they’ll say investors should make their own decisions.

Fed officials even feign a blasé disregard for what’s going on in the stock market. But trust me when I say they are obsessed with it (I spent five years advising global hedge funds about what the Federal Reserve was thinking).

Of course, the Fed at this moment does want stock prices to go sideways or even drop – anything but rise – because rising stock prices make people feel wealthier and cause them to spend more, easing financial conditions and stoking inflation.

Rewind to Friday, August 26. At the Fed’s annual monetary policy conference in Jackson Hole, Wyoming, Chairman Jerome Powell spoke forcefully and directly in an attempt to convince investors that the Fed will not pivot to a neutral or rate-lowering stance later this year or early next.

Essentially, he was trying to wring the last bits of optimism out of the markets.

The S&P 500 Index plummeted 3.4% in the hours after his speech and dropped nearly 6% over the next four trading sessions.

Of course, Powell said nothing in that speech about wanting markets to drop.

But last week one of his top deputies admitted it.

Federal Reserve Bank of Minneapolis President Neel Kashkari said he was “happy to see how Chair Powell’s Jackson Hole speech was received” by the stock market. Kashkari added that he “was not excited” when the market rallied after the Fed’s July 27 interest rate announcement.

So there you have it.

It seems the Fed is determined to send stocks lower this year and even into 2023, certainly until inflation – currently running at 8.5% year over year – falls to 4% or so.

No Respite for Markets?

That’s some pretty depressing news for investors. After all, the economy is booming if you judge by corporate profits, the labor market and consumer sentiment.

So should we investors just resign ourselves to a down or sideways stock market this year?

If the economic data comes in just right – good but not great, with the gap between labor demand and labor supply starting to close – the Fed just might be able to nail the holy grail of central banking, a soft economic landing.

That would mean Powell and company could slow the economy and tame inflation without tipping the economy into recession and dipping further into bear market territory.

It’s all about the data, as Powell said in his Jackson Hole address. He specifically said that upcoming Fed decisions on interest rates will depend “on the totality of the incoming data.”

So if the data is in the “Goldilocks zone” – neither too hot nor too cold – the Fed and investors may get a break this year, and we may even see a gently rising stock market.

Fortunately, the jobs report on Friday brought real hope for this.

In fact, commentators were calling the Labor Department report “a Goldilocks report.”

That’s because the 315,000 new jobs added in August matched expectations – no evidence of recession but not too robust either.

That rate can rise if people are losing jobs – that’s bad.

It can also rise if more people come off the sidelines and start looking for work – that’s good. And that’s what happened in August. The closely watched labor force participation rate jumped in August, from 62.1% to 62.4%. 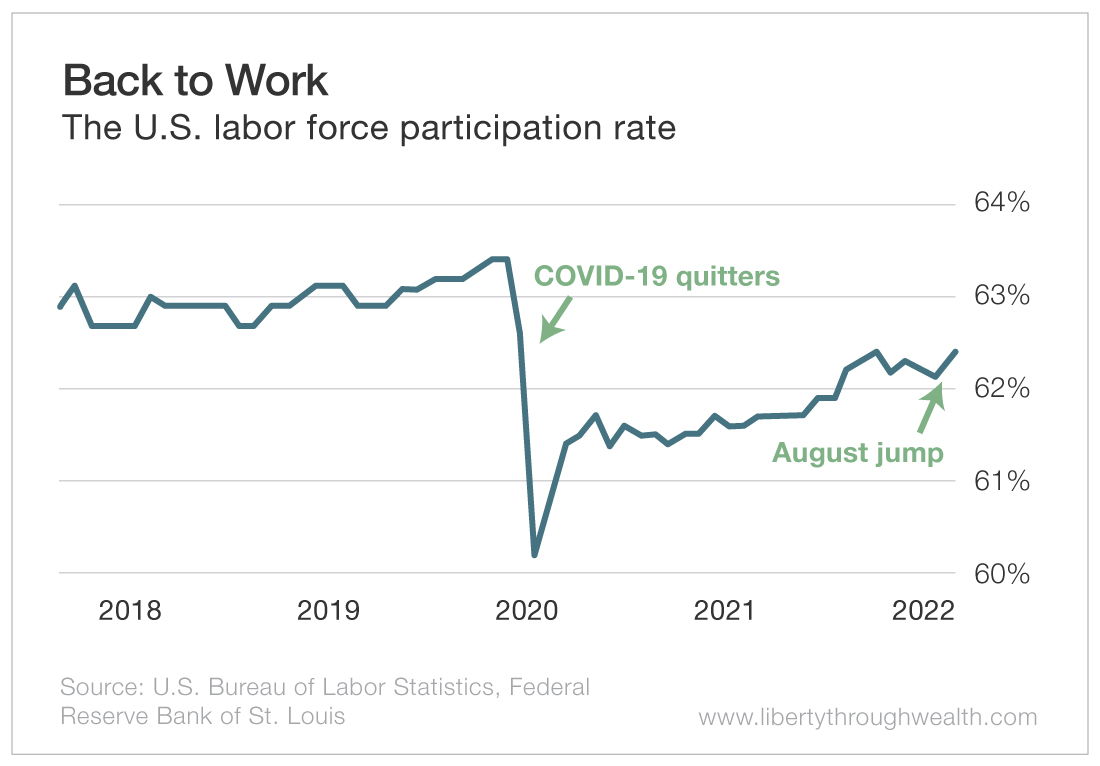 That small increase may seem insignificant. But it’s exactly what the Fed has been hoping for.

It means that many of those people who quit the labor force during the COVID-19 pandemic are starting to return. In fact, the August participation rate is the highest since March 2020, which marked the beginning of the COVID-19 era in the U.S.

Maybe, just maybe, the era of workers deciding to not work anymore is coming to an end.

That would mean that the huge gap between job openings and workers looking for jobs – which is a huge part of the inflation problem since it drives the vicious wage-price spiral – is closing.

Sure, Friday’s jobs report was just one data point. There will be many others to guide the Fed’s hand on rates. The consumer price index report on September 13 will be a major one.

As we watch that data roll in, let’s keep rooting for Goldilocks. She’s all we’ve got!