There’s no better gift for your children than helping to secure their financial future. You’d be hard-pressed to find a better way to do that than by socking away some money for them in rock-solid stocks that have the potential to grow for decades.

Not every stock fits the very long-term bill though, so we asked our three of our contributors to pick great buy-and-forget stocks that they believe could reap your grandchildren rich returns. Here’s why they chose JPMorgan Chase (NYSE:JPM), Sherwin-Williams(NYSE:SHW), and 2U Inc. (NASDAQ:TWOU).

Owning the future of education

Steve Symington (2U Inc.): To succeed, today’s youth require a good education, so why not buy them a piece of a promising business that’s shaping the future of learning: online higher-education specialist 2U. 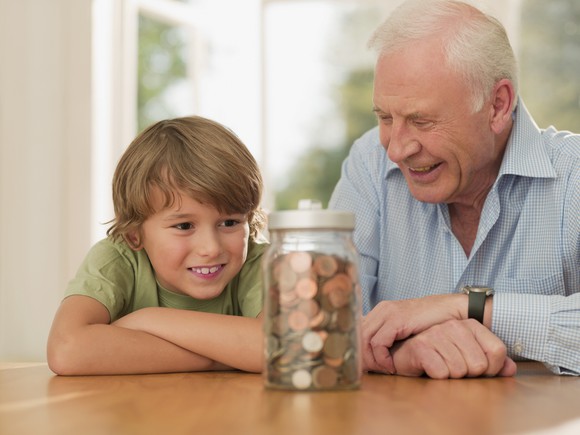 Though 2U already has 38 announced programs at 17 top-200 universities, over the long term, the company expects to grow the number of programs it offers to around 193. As a result, 2U is also targeting at least 30% year-over-year revenue growth “for the foreseeable future.”

Last quarter was no exception. Revenue climbed 36.7% year over year to $64.8 million, which produced adjusted net income of $500,000, or $0.01 per share. Both the top and bottom lines arrived above the high ends of 2U’s financial guidance ranges, which allowed the company to increase its full 2017 guidance.

What’s more, earlier this month, 2U agreed to spend $103 million (plus $20 million in potential earn-out payments) to acquire GetSmarter, a premium online short-course specialist that caters to working professionals. The acquisition will accelerate both 2U’s international expansion and its entry into non-degree alternatives.

So if you’re willing to buy 2U stock in these early stages, I think watching its growth story play out in the coming years could be a great learning experience for a young investor.

Your grandchildren will thank you for choosing this stock

Neha Chamaria (Sherwin-Williams): If you’re investing for your grandchildren, you’re thinking really long term: You need stocks that will not only be around decades down the line, but will also have grown considerably over time. One way to pick such companies is to choose a proven leader — or better yet, a household name — in an important industry, one that has been an outperformer and grown exponentially over the years, and offers reliable dividends too add extra income to your portfolio. For those criteria, I can think of no better candidate than Sherwin-Williams.

Let’s step back two decades to show how far the stock has come: 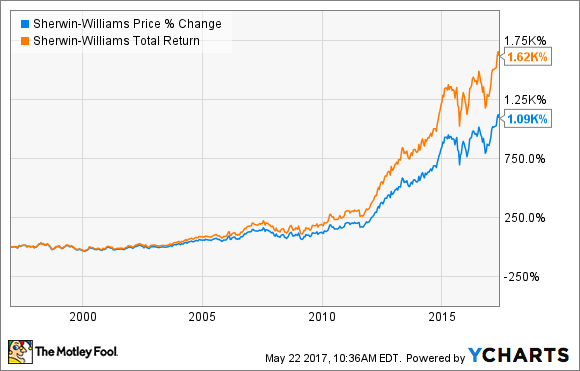 While no one can guarantee that Sherwin-Williams will be a multibagger in the years to come, there’s little reason to believe it won’t grow. The stock’s tremendous run up isn’t a fluke: This is a 150-year-old paint company that has made its mark in the housing, construction, and industrial markets with its namesake and Dutch Boy brands, among others. Going by the consistent growth in its same-store sales — it improved 5% last year — there’s no denying Sherwin-Williams enjoys brand loyalty.

An expansive own-store setup, credible management, a focus on growth, and financial fortitude have helped it grow its net income and free cash flows by many times over the years. And there’s no greater proof of Sherwin-Williams’ credibility than its dividends, which it has raised every year since 1979. For long-term investors, those payouts can make a huge difference, as the “total return” change in the above chart reveals. With the paints and coatings company on course to become the largest in its industry when it acquires Valspar, there’s a strong chance your children will thank you later for buying them some shares of Sherwin-Williams today.

A bank for the long haul

Jordan Wathen (JPMorgan Chase): In the banking industry, where a 1% return on assets is the hurdle for “good” banks, there isn’t much room for error. Good banks do well by avoiding the bad.

JPMorgan shines because of its management, and I think that goes deeper than CEO Jamie Dimon. It has the right incentive structure in place to do well even if Dimon steps down in the next few years.

A recently filed proxy statement shows that 95% of Dimon’s 2016 pay of $28 million was classified as “at-risk” pay. He earned $1.5 million in base compensation last year, with the remainder made up of $5 million in cash and $21.5 million taking the form of performance share units.

Thus, a large share of the CEO’s compensation rests in JPMorgan’s ability to generate good returns on tangible common equity, which keeps management’s interests aligned with those of the shareholders. This is how compensation plans should work, and it’s what gives me confidence that JPMorgan will generate attractive returns over full banking cycles.

So long as this incentive structure is in place, investors can be confident that the bank will be run with long-term shareholders in mind. And for that reason, even at a recent price of roughly 1.8x tangible book value, I think JPMorgan stock is a good pick for the long run.