The Trump rally and rotation continued on Wall Street last week as the Dow kept on creeping towards 20,000. Seeing all this green on the screen along with eye-popping returns on equities since Election Day can leave you a little gun shy. To The contrary, my friends, this is the precise time when you should be shifting your strategy towards finding breakout stocks.

What I mean by a breakout stock is a stock that’s at or near 52-week highs which is riding a wave of momentum higher. These stocks get up into uncharted territory and that can mean very little resistance lies ahead. But you can’t go out there and buy just any stock that’s at highs. You still have to scrub these stocks in order to find those with the highest likelihood of success.

One way to put the odds in your favor is to screen for stocks that are Zacks Rank #1 (Strong Buy) and Zacks Rank #2 (Buy) stocks with a Zacks Momentum Style Score of A or B. That way, you not only find stocks that are breaking on through on strong momentum but you’re also finding stocks that have seen recent earnings estimate revisions in the positive direction. Increased EPS estimates could mean business conditions are improving and the company stands to make more money next quarter. When these factors all go hand-in-hand it makes for a very good combination.

Here I’ve put together a list of the five hottest momentum stocks in the universe for you to investigate further.

Resolute Energy Corporation, an independent oil and gas company, engages in the acquisition, exploitation, exploration for, and development of oil and gas properties in the United States. The company holds interests in the Aneth Field covering approximately 43,000 gross acres located in the Paradox Basin in southeast Utah; and covering 27,750 gross acres in the Permian Basin in west Texas and southeast New Mexico. As of December 31, 2015, its estimated net proved reserves were approximately 33.1 million barrels of oil equivalent. 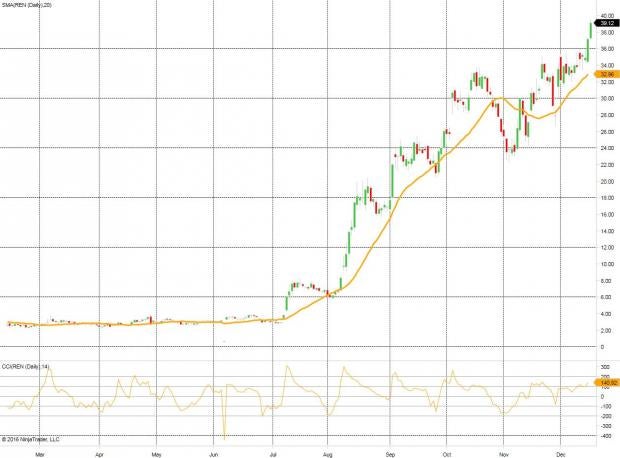 After a 1-for-5 reverse split shares of Resolute Energy when absolutely bonkers. The stock was trading below $3 in early July and now is nearly $40. You can chalk this one up in the “How the heck did I miss that?” section. The initial push in July stalled around $8, pulling back to $6 before another surge took it to $20. Again, a pause, retrace, and another push higher. Based on this stock’s behavior, I’m waiting to see where this next surge goes before looking for a retrace to add a position.

Ross Stores, Inc., together with its subsidiaries, operates off-price retail apparel and home fashion stores under the Ross Dress for Less and DD’s Discounts brand names in the United States. It primarily offers apparel, accessories, footwear, and home fashions. As of October 10, 2016, it operated 1,342 Ross Dress for Less stores in 36 states, the District of Columbia, and Guam, and 193 DD’s Discounts stores in 15 states. 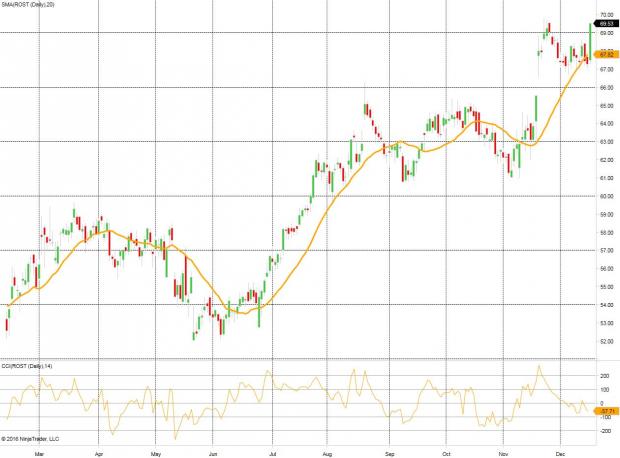 Ross shares went on a mighty run off the May lows, finally running out of gas near $66 in August. A three month consolidation following the run had the stock bouncing between $61 and $66 before a breakout on earnings in November took the stock just shy of $70. Friday’s rally pushed ROST to a fresh 52-week closing high. This could have legs here. 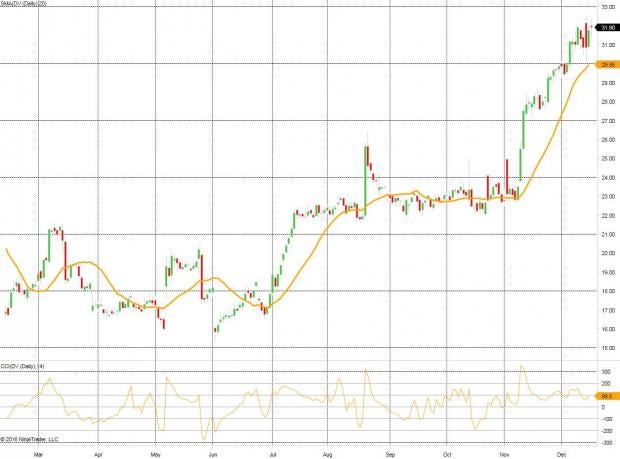 Save for one high surge in mid-August, DV stock was essentially pinned between $22 and $23 for four months. The Election Day rally sparked a move through $26 that really has yet to relent. The CCI has been above the zero line since late October, confirming a very bullish trend. A little bit of choppy action the last couple weeks could mean a consolidation period lies right around the corner. 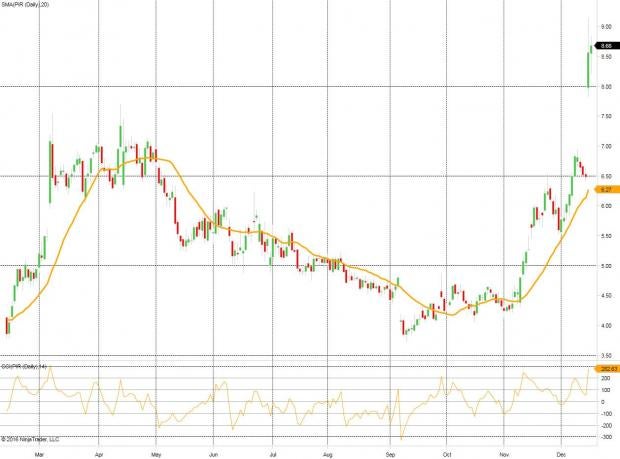 A rally into March was met with a slide down into September back to the February lows. The good news is a bullish trend has emerged since the stock leapfrogged the 20-day moving average in early November. The bullish attitude was confirmed by a great earnings report and now the stock has gapped up near $9. I’m hesitant to chase this rally though as I believe the April highs will be retested before the stock gets to double digits. 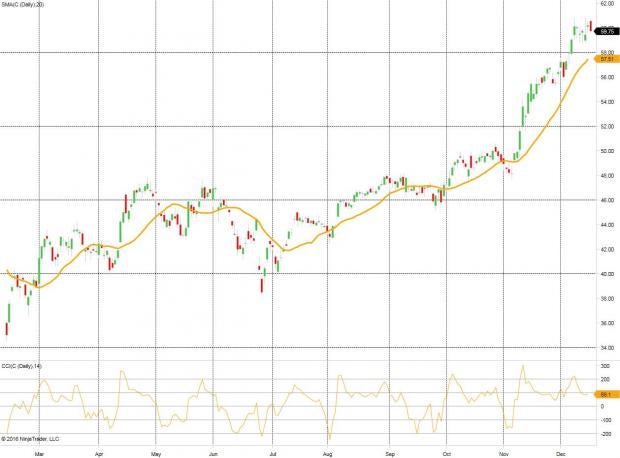 Normally when I put these articles together I don’t get a huge name like Citigroup. The fact of the matter is that bank stocks have been on fire since Election Day. Better net interest margin from rate hikes should help bank profits during the Trump Administration. That’s what investors are hoping as they’ve run these banking stocks up through the roof. Citi shares have broken out from $50 resistance and now are testing the $60 level. I’m waiting to see the commodity channel index come down to the zero line from 89 to add a position.

Buying breakouts can be risky business. You have to ask yourself whether the breakout has the power to sustain itself or if it’s built on false pretenses. By applying the Zacks Rank and Zacks Style Scores to these breakout stocks, you can find which stocks have the highest likelihood of continuing to press higher, onward and upward through new levels.

You are welcome to download the full, up-to-the-minute list of 220 Zacks Rank #1 “Strong Buy” stocks free of charge. There is no better place to start your own stock search. Plus you can access the full list of must-avoid Zacks Rank #5 “Strong Sells” and other private research. See the stocks free >>