Despite the cloud of uncertainty hanging over global markets in 2016, many major stock markets around the world moved up. But there’s no better time than now to make sure that you’re adequately protecting your portfolio, just in case 2017 isn’t kind to investors.

China’s Shanghai Composite was one of the few major markets that didn’t have a good year. It slumped 9% in 2016.

Because global markets performed relatively well in 2016, it’s easy to think that we’ll see an equally rosy performance this year. But status quo bias is the enemy of portfolio performance. A good investor — like a good driver — is defensive. As 2017 begins, we’ve put together six steps to help you prepare your portfolio for what might come next.

1. Make Sure You Have Enough Cash

Cash doesn’t yield much, its value decreases over time (due to long-term inflation), and if you lose it (or put it through the washing machine), it’s gone forever. But in 2017, you’d be smart to have more cash in your portfolio.

Cash is one of the best ways to hedge your portfolio. When you hedge, you’re reducing your losses in case your investment strategy is thrown a curve ball.

Then, let’s say the shares in your portfolio decreased in value by 5%, but your cash value remained constant. In this scenario, you would have a paper loss of $2,500 on a $100,000 portfolio. This means it would be down only 2.5%.

But if you had held only stocks, you would have been down 5%. In other words, you would have lost $5,000. By hedging with cash, you can protect your portfolio from market fluctuations and cut losses in half.

Cash has benefits beyond hedging, too. With cash, you can immediately take advantage of fleeting investment opportunities. As we’ve written before, cash lets you pick up “money lying in the corner.”

So free up some cash this year, even if it means reducing profits by a small amount.

2. Stand by Your Stop-Loss Levels

Admitting defeat is hard. As an investor, it’s important to sell your bad positions, even if you feel like you’re losing the battle. If you don’t, a few bad stocks could decimate your holdings and you may end up losing the war.

Remember, you’re not alone if you’ve bought a stock that’s decreased in value. Every investor has done it. Sometimes an idea that seemed good at the time goes down by 10%, 30%, 50% or more. We tell ourselves that a loss isn’t a loss until we sell. And we fear that selling now will make us miss the rebound, and gaining back everything.

The hard truth is that rebounds don’t happen very often. The key to not losing money isn’t to wait for the rebound. Instead, you should sell before you feel the need to wait for a rebound.

Using a trailing stop is the best way to do this.

To show you how a trailing stop works, let’s say you bought a stock at $2.00. And let’s also say you set your trailing stop at 20% below the initial price, which would be $1.60. In this scenario, if you stick to your trailing stop, you will protect your portfolio from further losses.

In 2016, we talked a lot about how important it is to diversify and to hold uncorrelated assets.

You should diversify by asset class, such as stocks and bonds, and then by sector and company. Diversification across markets and economies is also a good idea.

A diversified portfolio has assets, industries and countries with low or negative correlation. This means that they won’t move up and down all at the same time.

As you can see from historical correlations between different markets and asset classes (such as stocks and bonds), this strategy generally works in the long run. (Don’t forget that when looking at correlations, a lower number means the two assets have a lower correlation.)

But watch out for market crises, as usual correlation trends don’t apply under these circumstances. As shown in the graph below, during the global economic crisis (which we calculate here as November 2007 to February 2009) correlations between all markets and asset classes rose sharply.

Having a properly diversified portfolio is like playing defense. Since markets have been doing so well lately, especially in the U.S., it’s time to move from offense to defense.

4. Invest in Different Markets Around the World

We’ve written before about the importance of investing locally because it means that you’re investing in what you know. But don’t make the mistake of investing too much money in your home market.

As shown in the graph above, most investors have too much exposure to their domestic markets. Not only do they live there, work there, use the local currency, and have real estate holdings there, but they also buy shares there, too.

Instead of overexposing yourself to your home market, it makes more sense to invest in other countries. And not just for the sake of diversification. Correlations (explained earlier) of different markets around the world have risen in the past 10 years.

For example, the correlation between Singapore’s STI and the S&P 500 was only 0.1 from 1990-1995. A correlation of 0.1 means there is almost zero correlation. But the correlation rose to 0.3 in the past five years. Globalization is responsible for this “correlation creep.”

But a better reason to invest in different countries is to improve your returns. Last year Singapore’s STI was up 4% and Hong Kong’s Hang Seng was up 3%. But the S&P 500 was up 13%, Thailand’s market was up 16% and the MSCI All World Index was up 9%.

These numbers show that if you were a Singapore- or Hong Kong-based investor, putting your money in other markets would have improved the return on your portfolio last year.

Gold is one of the best hedges against market volatility. Unlike other asset classes, such as stocks or bonds, gold moves independently.

For example, last year, worries over China’s economy and the devaluation of the renminbi rattled markets around the world. Globally, many markets declined 20% from their recent peaks, entering bear market territory. During January 2016, the MSCI World Index lost 6% and the Hong Kong’s Hang Seng index was down 11%.

But lo and behold, as you can see in the graph below, gold rose 5% in January 2016 and went on to have its best quarterly performance since 1986. 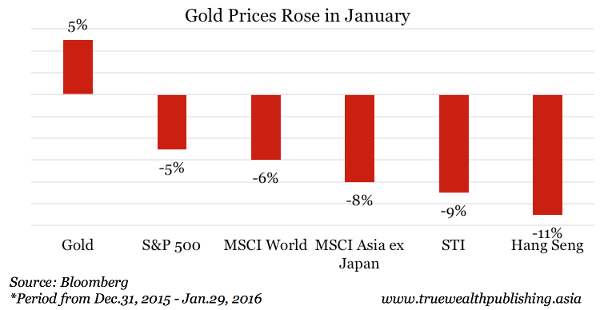