On Saturday, May 6, thousands of people will gather in Omaha, Nebraska for the annual Berkshire Hathaway shareholder meeting, led by Berkshire chairman Warren Buffett and vice chairman Charlie Munger.

That means it’s time for our annual look at the mutual funds with the biggest stakes in the stocks held in Berkshire Hathaway’s investment portfolio, as listed in Buffett’s annual letter to shareholders. You can read this year’s letter here, or as part of Berkshire’s annual report, here.

As usual, this year’s letter includes Buffett’s explanations and opinions on a variety of topics, in addition to the financial results.

Buffett explains why he doesn’t “adjust” Berkshire’s earnings like so many Wall Street-focused public companies do, and why Berkshire’s market value has diverged so dramatically from its book value during the past 20 years, as the company’s profits have increasingly come from operating businesses rather than investable securities.

He discusses in some detail why he likes those businesses, which include three major insurers (Berkshire Hathaway Reinsurance Group, General Re, and GEICO), a railroad (Burlington Northern Santa Fe), a utility business (Berkshire Hathaway Energy), and dozens of smaller manufacturing, service, and retail businesses.

Buffett discusses a wager he made nine years ago with investment manager Ted Seides: Seides bet that he could choose five funds of hedge funds that would collectively outperform an S&P 500 fund in a 10-year period, and Buffett bet that the index fund would beat the hedge funds. (Spoiler alert: with one year left in the bet, the S&P 500 fund is far ahead.)

As always, Buffett’s letter also lists the top stocks in Berkshire’s investment portfolio. This portfolio had been managed entirely by Buffett, but for the past few years some of it has been run independently by Todd Combs and Ted Wechsler, who each now manage more than $10 billion. (Thus, a more accurate title for this article might be “Funds That Buy Like Buffett, Combs, and Wechsler,” but that’s not as snappy.)

The top two holdings by market value as of Dec. 31, 2016 were longtime Buffett favorites Wells Fargo and Coca-Cola KO.

Just like last year,  International Business Machines is in third place and  American Express is in fourth. After that come Apple, Phillips 66, US Bancorp, Goldman Sachs, Delta Air Lines and Moody’s. Apple and Delta are newcomers to the top 10, replacing  Procter & Gamble and  Wal-Mart.

The table below shows funds with the biggest weightings in Berkshire’s top 10 holdings at the end of 2016, as listed above. We left out sector funds such as Fidelity Select Wireless FWRLX and Fidelity Select Computers FDCPX, which would otherwise be the top two (owing to their Apple stakes), as well as funds with less than $500 million in assets and those with less than a five-year track record.

With those constraints, the following table shows the 10 funds with the most Buffett-like taste in stocks, including each fund’s five-year return and percentile rank in its Morningstar Category through April 30, 2017. 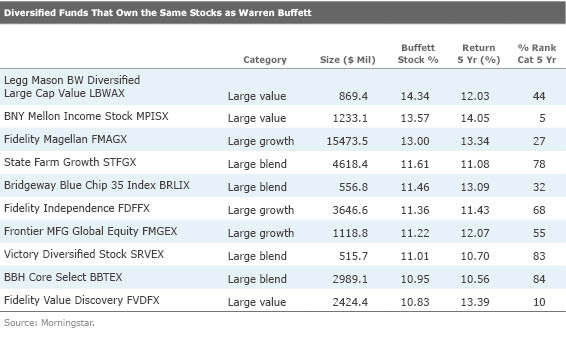 There’s been a fair amount of turnover on this list compared with years past, and one big reason for that is the first-time presence of Apple among Berkshire’s top stock holdings. Nine of these 10 funds hold Apple, and for several it’s among the top holdings.

Buffett has been famously wary of owning technology stocks in the past, saying he doesn’t have sufficient understanding of their businesses, but Apple is arguably more of a consumer company these days, and in any case, it’s not clear whether the Apple stake is attributable to Buffett or to Combs and/or Wechsler.

As in previous years, the managers of these funds follow Buffett in liking big, profitable companies with strong competitive advantages, but as a group they now have a bit more of a growth tilt.

This trend is illustrated by two newcomers, Fidelity Magellan FMAGX and  Fidelity Independence FDFFX, both of which are managed by Jeff Feingold and have Morningstar Analyst Ratings of Neutral.

Feingold has managed Magellan since 2011 (and Independence since late 2016) using a moderate growth strategy that balances fast growers with high-quality stocks having stable balance sheets and high returns on capital. Apple is by far the largest holding in Magellan’s latest portfolio, but Feingold also has significant positions in Wells Fargo, Coca-Cola, Goldman Sachs, US Bancorp, and Berkshire Hathaway itself, which is a top-10 holding. Fidelity Independence is very similar, except it doesn’t hold Coca-Cola, US Bancorp, or Berkshire.

Another newcomer to this year’s list is Bronze-rated  Fidelity Value Discovery FVDFX, managed by Sean Gavin. It’s much more of a traditional Buffett-style fund, with an “intrinsic value” strategy that emphasizes stocks with reasonable valuations alongside high returns on equity and returns on invested capital. About one fourth of the portfolio is currently in financials stocks, and Gavin’s taste in financials is very similar to Buffett’s. While Apple is a top-five holding, Berkshire Hathaway is the portfolio’s largest position, with Wells Fargo second, and US Bancorp and Goldman Sachs in the top 15.

Bronze-rated  Bridgeway Blue Chip 35 Index BRLIX is managed by John Montgomery and his team at Bridgeway. Unlike managers who use fundamentals and valuation to try to identify the most-attractive stocks, the Bridgeway team simply ranks the 150 largest U.S. stocks by market cap and then builds an equal-weighted portfolio of 35 stocks diversified by sector, holding no more than four stocks from any one industry and rebalancing occasionally to keep any position from getting too large or too small.

Like Fidelity Magellan and Fidelity Value Discovery, this fund has a significant position in Berkshire Hathaway, the eighth-largest holding as of Dec. 31, 2016.

Apple and Wells Fargo are also among the 10 biggest holdings, and IBM and Coca-Cola are also significant positions. This fund’s returns tend to track the large-blend category pretty closely most of the time, but it has held up better than its peers in tough markets where investors flee to safety, such as 2008 and 2011.

Finally, there’s Silver-rated  BBH Core Select BBTEX, comanaged by Tim Hartch and Michael Keller of Brown Brothers Harriman. Much like the other managers above, Hartch and Keller maintain a fairly concentrated portfolio (around 30 stocks) dominated by profitable blue chips trading below their estimated intrinsic value, and the fund has had a rough few years despite a strong long-term record.

As with Fidelity Value Discovery, Berkshire Hathaway is this fund’s biggest holding, with 7.1% of assets as of Feb. 28, 2017. US Bancorp and Wells Fargo are also in the top 10, accounting for all of the fund’s exposure to “Buffett” stocks. This is the only fund on the list not to hold Apple at all.