Many U.S. stocks posted March highs in the month’s first session, following President Trump’s Congressional address. Pullbacks into this week have held key support levels, predicting fresh buying interest will emerge early in the second quarter. The speculative fervor in penny stocks has eased as well, but many components are still working through bullish price patterns.

Positive seasonality driven by the January Effect will end in early April, most likely giving way to a stockpicker’s market that lasts into the summer months. In turn, this favors a trading environment in which a handful of penny stocks defy broad-based indices, gaining ground in reaction to special situations, rapid growth or oversold technical readings.

Junior biotech and precious metal plays incurred minor March losses while the gold futures contract ran in place and the iShares Nasdaq Biotechnology Index ETF (IBB) tested 14-month base resistance at $300. A breakout above that contested level should trigger much stronger sector interest that should expand into the most speculative low-priced plays.

The majority of March’s list continued to build basing patterns. Antares Pharma, Inc. (ATRS) led the upside, rallying to a new high while Western Copper and Gold, Corp. (WRN) survived a metals shakeout and now looks set to test rectangular resistance. Both stocks have been added to April’s list, along with Valhi, Inc. (VHI), which could rally out of a symmetrical triangle pattern.

Here are the penny stocks to watch for April 2017: 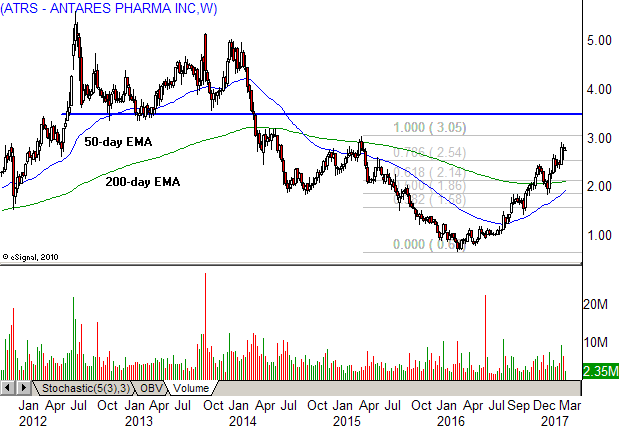 Antares Pharma, Inc. (ATRS) posted an all-time high at $5.58 in 2012 and entered a multi-wave downtrend that finally ended at 67-cents in the first quarter of 2016. The subsequent recovery lifted the stock back above broken 2014 support at $1.80 in November, setting off buy signals that have contributed to gains greater than 50% in the last four months.

The rally pierced resistance at the .786 Fibonacci selloff retracement in March and has held those gains into quarter’s end, raising odds the stock will complete a 100% round trip into the 2015 high above $3.00. That rally will confirm the new uptrend while setting the stage for additional gains that test resistance at $3.50, generated by the 2014 triple top breakdown (blue line). 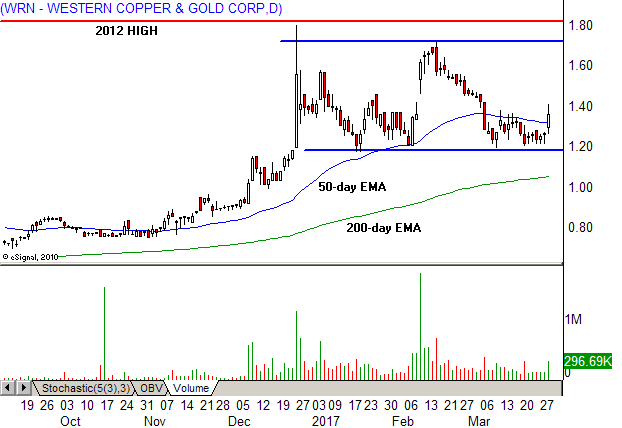 Western Copper and Gold, Corp. (WRN) got caught in a commodity shakeout generated by doubts about the president’s infrastructure initiatives. The stock held up well through the downturn, dropping into range support at $1.20 that’s defined a floor since December. It rallied off that base on March 29 and closed above the 50-day EMA for the first time in three weeks.

The rectangle may complete the handle of a cup and handle pattern because it’s also testing resistance at the 2012 high (red line). A breakout will target the 2011 all-time high at $4.49, which may generate a larger scale breakout or topping pattern. As a result, buying within the current trading range may eventually pay off with a broader uptrend that faces no overhead resistance. 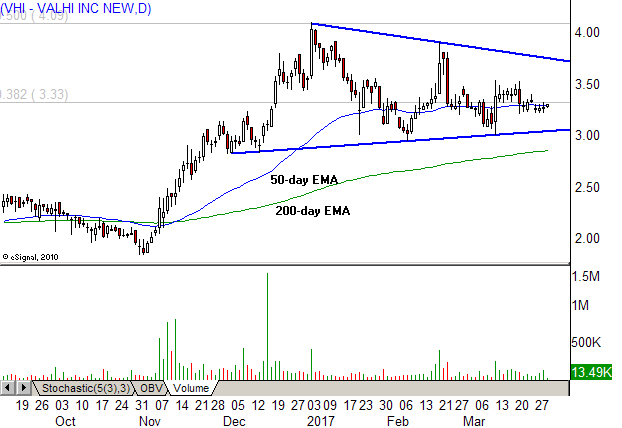 Valhi, Inc. (VHI) topped out in the low-20s in 2011, following a multi-year rally, and tested the high two years later. Sellers then took control, triggering a decline that continued into the first quarter of 2016, while dropping the stock to a 19-year low at 85-cents. The subsequent bounce reached the 50% retracement of the last selling wave in January 2017 and eased into a symmetrical triangle.

Quiet March price action has settled near the center of the triangle at the 50-day EMA, marking a typical location for the start of a breakout. It will now take a rally above $3.75 to confirm that bullish outcome, with momentum set to escalate when it mounts additional resistance at $4.00. In turn, that favors upside that may complete a round trip into the 2015 high at $7.33. 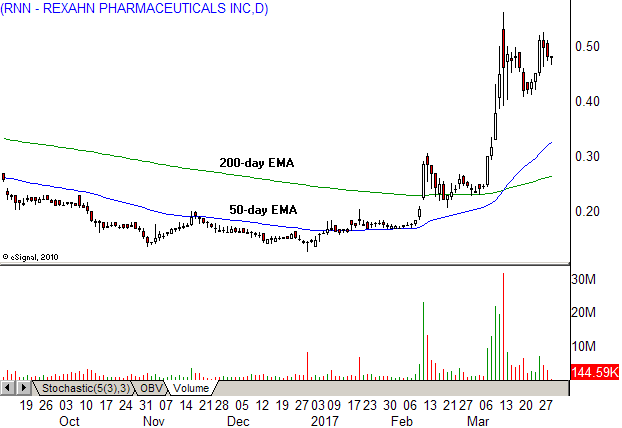 The stock settled at 13-cents into year’s end and turned higher, lifting above broken support in March and setting off a 2B buy signal that denotes the failure of bears to defend resistance. The rally stalled at 56-cents mid-month, giving way to a small pennant that should support even higher highs. Meanwhile, a pullback to 30-cents should offer a low-risk buying opportunity. 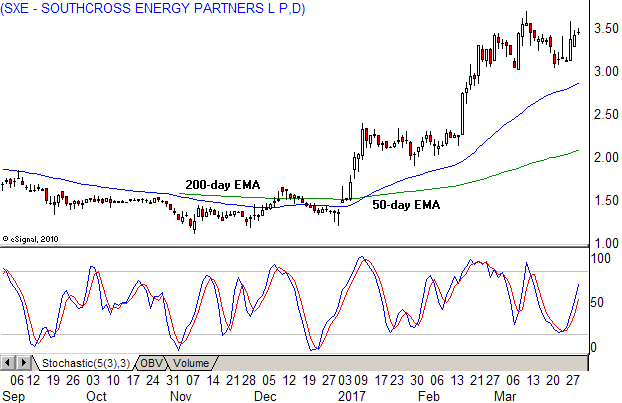 Southcross Energy Partners, L.P. (SXE) came public in the mid-20s in 2012 and ground sideways into a 2015 downtrend that plummeted to an all-time low at 38-cents in February 2016. The subsequent recovery wave stalled at $3.65 in April, giving way to a steady decline that posted a higher low at $1.10 in November, just after the presidential election.

The stock turned higher in January 2017, gaining ground at a steady pace into March, when it completed a 100% round trip into the April 2016 high. In turn, this could mark the next stage in a cup and handle pattern that yields a rally above $6.00 as a measured move target. Weekly relative strength cycles suggest another few weeks of consolidation before it clears range resistance. 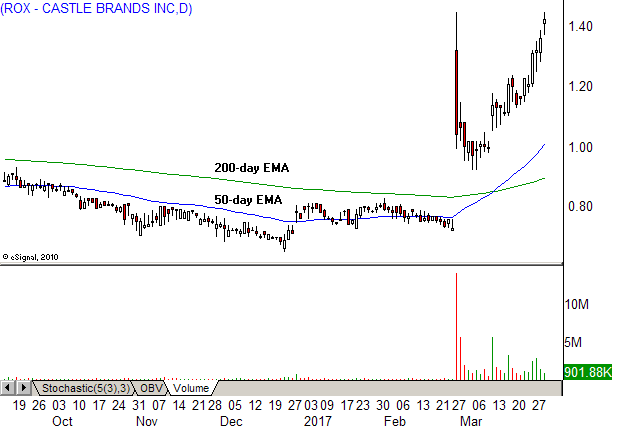 Castle Brands, Inc. (ROX) entered an immediate downtrend after its 2006 IPO at $7.75, descending into the 2009 all-time low at 1-cent. It recovered into two rally waves, with the first reaching 74-cents in September 2009 and the second ending at $2.03 in November 2014. The stock then eased into a decline that continued into December 2016, dropping the stock to a 3-year low at 65-cents.

It gapped up on March 1, doubling in price in a single session after a key acquisition, and pulled back to 92-cents a few days later. It’s spent the last three weeks gaining ground in a slow grind uptick that’s now testing the rally high. The stock could break out immediately or turn lower in a final pullback to $1.15 or so, completing a bullish pattern that targets the 2014 high above $2.00. 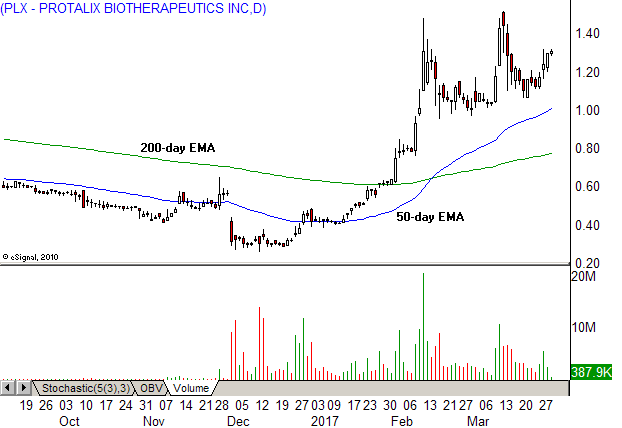 The stock surged higher in January and continued to gain ground into the February 13 peak at $1.48. It’s been consolidating since that time, carving an ascending triangle with support near $1.10. Positions taken within the trading range could benefit from a breakout that reaches the 2015 high at $2.40, but it also makes sense to cut losses with a stop below triangle support. 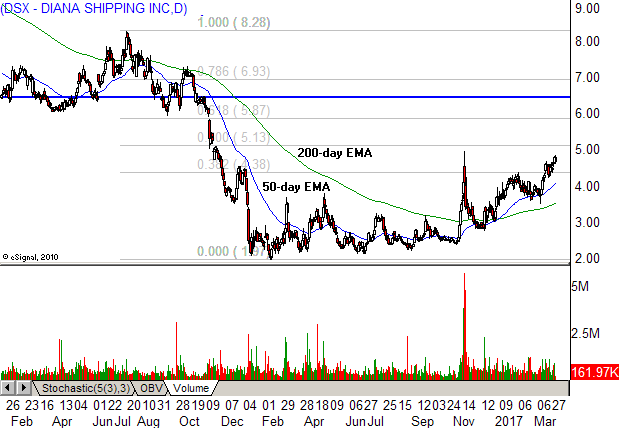 Diana Shipping, Inc. (DSX) rallied to an all-time high at $45.15 in 2007 after coming public in the mid-teens in 2005. It posted a bear market low at $6.85 and bounced into a lower high at $19, ahead of renewed selling pressure that broke the low in early 2016. The stock posted an all-time low at $1.95, bounced along that level multiple times and then took off in a recovery rally.

The first wave stalled at the 50% selloff retracement in November, giving way to a pullback and bounce that’s now reached the prior high. A breakout could fill the November 2015 gap between $5.70 and $6.00, ahead of a test at new resistance generated by the breakdown through the bear market low (blue line). Aggressive profits should be taken at or below that price level. 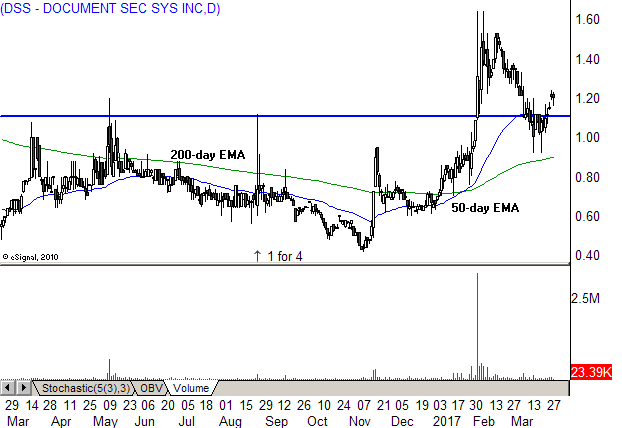 It then took off in a January Effect rally that mounted base resistance at $1.10 (blue line) in February. The upside stalled at $1.64 a few days later, with price action since that time grinding out an orderly pullback that bounced at new support last week. This turnaround sets the stage for a test at the rally high, followed by trend continuation that could reach resistance at $3.50. 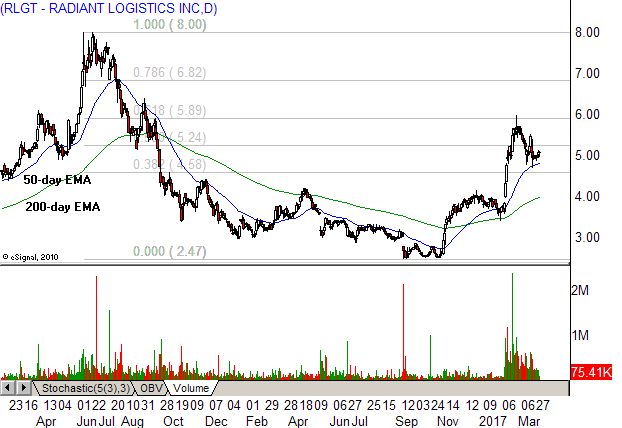 Radiant Logistics, Inc. (RLGT) came public at 95-cents in 2006 and hit an all-time low at 9-cents at the end of last decade’s bear market. It then turned higher in a strong uptrend that reached an all-time high at $8.00 in June 2015, ahead of an intermediate correction that lasted into the second half of 2016 while dropping the stock to a 2-year low at $2.45.

It turned higher in November, ramping into two waves that stalled at $5.96 on February 27. A March decline settled at the 50-day EMA mid-month, giving way to two weeks of testing at that level. The stock hasn’t bounced yet, but relative strength cycles have turned higher, favoring an uptick and followthrough rally that could reach the 2015 high in coming months.

April’s penny stock focus has shifted away from speculative biotech and precious metals plays, into a laundry list of sectors, including transportation, energy, and beverages.

<The author held no positions in aforementioned stocks at the time of publication.>