The Dow has nabbed record closes for eight straight sessions — and what about the S&P 500?

The last time that broad index suffered a 1% drop, as detailed in our stat of the day, it was October and the Cubs still were battling to end their storied World Series drought.

CFRA’s Sam Stovall says he’s looking for a long-overdue “digestion of gains,” though he adds the pause will not likely result in the end of this bull market.

The run will continue, the chief investment strategist writes, thanks in part to improving earnings and inflation staying subdued. In support, he notes one indicator that’s close to getting triggered.

“If you need additional encouragement that a bear market is not just around the corner, history again may offer some more virtual Valium,” says Stovall, who delivers our call of the day.

Since 1945, there have been 27 years when the S&P has achieved gains in January and February. The stock index then finished up for the year (on a total-return basis) in every one those years, according to Stovall. That’s going 27 for 27, or batting a thousand.

The average rise in those years was 24%, as shown in his chart below, and the gauge was up further in the remaining 10 months 25 of 27 times.

So that bodes well for 2017 — though the chart’s footnote features that favorite Wall Street caveat: “Past performance is no guarantee of future results.”

Plus, February isn’t over yet, and it’s typically the stock market’s second-worst month of the year. But the S&P is up 3.8% for the month, after rising 1.8% in January.

As Stovall puts it, the first two months can “offer a clue that investors believe that good things still lie ahead.”

90 straight trading days — That is how long the S&P has gone without closing lower by 1% or more, notes Charlie Bilello, research director at Pension Partners.

The stock gauge ended 1.2% down on Oct. 11 — more than four months ago — and hasn’t clocked out on such a negative note since then. 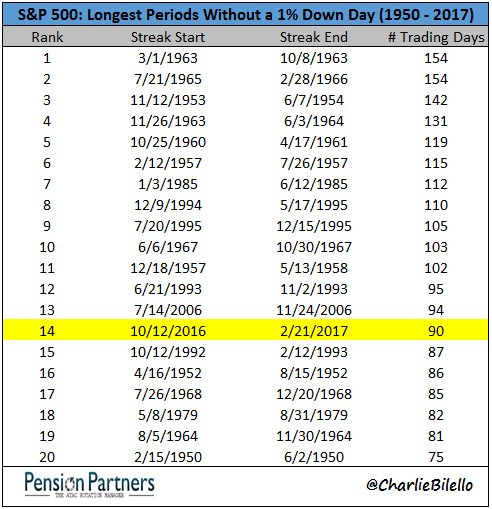